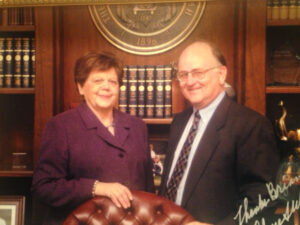 DECIDING TO COME
Brian Farr was not originally planning to attend law school. “I came to law school not because of a strong desire, but because I had a prompting that it was what I should do,” he said.

IN LAW SCHOOL
As a member of the charter class, Farr recalls the unique experience of not having upper-class students in the school. “That was challenging in some respects because we didn’t have any upper-class students to tell us how law school should be, but it also gave us a greater opportunity to interact with the professors,” he said.

Property law Professor Dale Whitman was particularly influential on Farr’s legal education. “When he had you stand and recite a case, you would state your position and he would say, ‘Surely you don’t believe that,’” Farr recounted.  “When Professor Whitman said those words, you knew it was an educational opportunity and that it was not personal. You could have a strong exchange in the reciting of the cases and still have a good feeling about it.”

CAREER
Farr practiced law for about ten years and then was invited to work at the Utah Attorney General’s Office. In this capacity, he worked on projects including the 2000 Olympics and the state’s centennial celebration, served as an office liaison with the legislature, and was a division chief with the task of supervising 35 attorneys who represented the governor and state agencies. “It was the variety that really kept me there,” he said.

Farr also had the opportunity to serve as legal counsel to then-Utah Governor Olene Walker. “You never knew when you came to work what was going to happen,” he said. “There was a lot of excitement seeing what challenges we had to respond to that day.”

LOOKING AT THE MISSION OF THE LAW SCHOOL
Farr believes that BYU Law School graduates have and will continue to have an impact in the world in diverse ways. Fundamentally, he sees the graduates contributing to a “more stable and more peaceful world” by protecting freedom. “I see the Law School preparing people who are well trained to protect the Constitution and constitutional rights, and to champion the cause of freedom,” he said.