Celebrating 40 years since the graduation of the charter class, BYU Law highlights a few the members in a series of articles and videos. This first article highlights Bruce Barton. Watch for an upcoming  feature on Sheila McCleave. 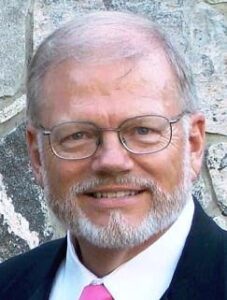 Ever since high school, Bruce Barton knew he wanted to be a lawyer. “I was quite successful in forensics and debate and thought I would love to be a trial attorney,” he said. When BYU announced the creation of a new law school in 1971, Barton knew he wanted to go, but he was slated to graduate from BYU that year, and the law school wasn’t yet open. He wondered how he should spend the next two years.

Barton decided to fill his time by earning his Masters in Public Administration from BYU while working as the manager of the Wilkinson Center. Working with Bruce Hafen, he started the BYU Pre-Law Association to help prospective students learn more about the new law school.

IN LAW SCHOOL
Barton’s law school experience was somewhat different than most of his classmates’ because he completed it in two years, along with classmates Paul Rodgers, Conrad Houser, and Randy Newman. “I guess you could call us ‘the the pre-charter class,’” he said.

Barton’s decision to graduate early had to do with his circumstances at the time. “I already had two degrees from BYU. I had a wife and two children and needed to get out and start working to put food on the table and pay back my school debts and loans,” he said.

He looked into the rules and regulations of BYU and the ABA and found that he could graduate in two years, but he would need to attend law school at BYU and the University of Utah simultaneously. He held “brown bag lunches” to explain his plan to other interested students, during which he recruited Rodgers, Houser, and Newman. The four of them committed to graduate early. “We car pooled together to the University of Utah for summer law school classes at the same time we were taking BYU Law classes,” he said.

Not everyone was pleased with Barton’s plan. “BYU Law was not accredited at the time and [Dean Lee] was worried that four of his students would fail the bar exam and put a blemish on the law school and that the law school would not receive accreditation,” he said.  Much to the relief of Dean Lee and others, all four of the students passed the bar.

CAREER
Barton’s legal degree, coupled with his MPA, led to his hire as Layton’s first full-time city attorney. After ten years, he was appointed as the city manager, a position he worked in for seven years. “My law degree helped me while I was a city manager in that I could determine potential legal issues for the city and take appropriate action to avoid lawsuits,” he said.

In addition to his work with Layton City, Barton also maintained a private practice from the time of his law school graduation. He also established and served as president and board chairman of Mission Health Services, a non-profit corporation owning several nursing homes in Utah.

Barton has written LDS books and scripture study helps. In addition, he continues to serve as a tour guide. He has guided American History tours for BYU as well as several customized tours to the Holy Land.

LOOKING AT THE MISSION OF THE LAW SCHOOL
“Any tree is known by its fruit. In this case, law school graduates’ lives are the fruits of the J. Reuben Clark Law School tree. And over the years, this fruit has been good,” Barton said. “Its graduates have gone on to not only practice law but to use their law degrees to make many different and significant contributions throughout the world.” 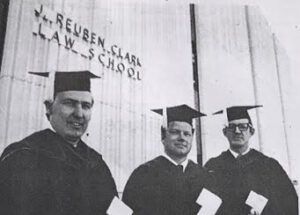 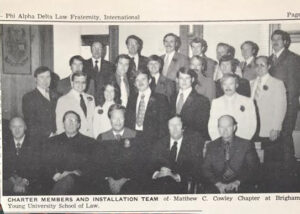 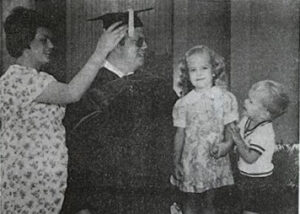