DECIDING TO COME
As a senior studying engineering at the University of Utah in 1972, Robert Grow ‘76 had a clear outline for his future life. He had been accepted to the University of Utah Medical School, and he looked forward to beginning classes there in the fall of 1974. On a bet with his friend and former mission companion Bob Johnson, Grow took the LSAT. His score attracted the notice of Rex Lee, and it wasn’t long before Grow received a phone call to meet with Lee.Although Grow was set on medical school, he was willing to talk to Lee, who suggested that Grow use the year between his graduation and his start of medical school to do a year of classes at the new law school. Lee found a Salt Lake law firm to sponsor a scholarship, and after some consideration with his wife, Grow decided to come to the law school for its first year.

Following his first year of law school, Grow spent his summer doing a clerkship in Washington, D.C., working on the Watergate trial. Although he enjoyed his work, Grow was still set on his plan to attend medical school in the fall.

As Grow and his wife, Linda, drove back to Utah at the end of the summer, they came to the conclusion that law school was where he needed to be that fall. “We had a strong feeling we should go back to the law school,” he said. Arriving just days before classes were to begin, Grow reneged his medical school enrollment and enrolled again at the J. Reuben Clark Law School.

IN LAW SCHOOL
Grow recalls his law school years as extremely busy, particularly because he was an editor on the first Law Review. “[It] took a lot of time,” he said. “You spent most of your time doing [it].” On many occasions Grow would stay up all night editing the law review with fellow editors because they knew it was vital to produce a quality publication. “[The law review] was what would help determine the reputation of the law school because every law school has a law review and they are  judged by [it],” he said. 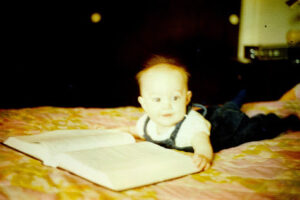 Law school was also a busy time for Grow’s personal life. During his first week of the first year of law school, Grow and Linda had their first child, Lisa. He recalled many afternoons spent holding her on one knee, a law book on the other knee, with Star Trek on the TV. He often came home to find her staring intently at a law book. Perhaps it’s no wonder she went on to graduate first in her class at Harvard Law School.
Grow remembers living just across from St. Reuben’s as an important element of the experience. “Early in the morning I could hear the warning bell–the five-minute warning bell–and I could still get to class,” he said. Although finances were always challenging in law school, Grow says there was a lot to be enjoyed. “It was actually, in many ways, a very wonderful life for us. We developed really good friends in the apartment complex,” he said.
CAREER
Grow’s engineering background coupled with a law degree has enabled him to have a diverse career. He practiced real estate law for about a decade and then spent the next decade serving as president of Geneva Steel, during which he developed expertise in environment and international trade and was awarded the Gary Memorial Award, the highest award given by the steel industry. He had the opportunity to help negotiate international treaties for steel with Europe and Japan. “I credit a lot of that to being an LDS missionary,” he said. “You just learn to talk, join groups, do whatever needs to get done, and it gives you confidence.” 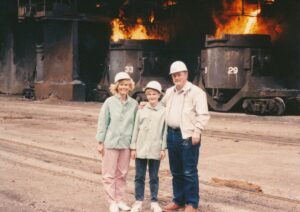 Grow also founded the nonprofit Envision Utah to bring together experts to look at Utah from a long-term perspective to strategically solve problems and ensure the continuation of a high quality of life. Three years after founding Envision Utah, from 1999 to 2002, Grow and his wife, Linda, presided over the California Sacramento Mission. “That was just life-changing,” he said. “There’s no other experience like that anywhere.”

After returning from missionary service, Grow jumped back into professional activities, continuing to help Geneva Steel and Envision Utah while also serving as senior counsel for a Los Angeles law firm and helping numerous communities strategically plan for the future. Grow has advised over 80 major urban regions in creating long-term visions. Combining his engineering and law backgrounds with his experience, Grow assists communities in planning for sustainable solutions for growth.

REFLECTING ON THE CHARTER
Grow continues to treasure the friendships he developed in law school. “I have a lot of lifelong friends from that class,” he said. “I think it was a fascinating coming together of people of all different perspectives… There was a sense of sacrifice and commitment in that charter group…. I think if you were to sort of really pin us down, most of us feel like we were supposed to be there, that it was really a calling to come and help build the law school’s reputation.”

Grow thinks Lee’s impact on the charter class is unmistakable. “Rex actually taught us that you could make a real difference in the world,” he said. “We watched him build a law school and go from a belief to actually implementing and creating a great place that we were all proud of. I think most of the class that I knew… went out to change the world. I think Rex taught us to do that by example.”

LOOKING AT THE MISSION OF THE LAW SCHOOL
Reflecting on Elder Oaks’ remarks that the mission of the Law School and its graduates will unfold in time, Grow believes that the mission is layered and still to be unfolded. “This law school is still young. Its destiny is still not fully known, and there is more to come,” he said. “It is an extraordinary group of leaders who have come out of this law school.”

“It’s clear the law school came at a very special time[,] and it’s mature now in a way where it allows it to speak to the laws of the land on issues of critical importance,” he said. “We have lawyers who are breaking down barriers on religious freedom throughout the world, helping rewrite constitutions of countries which will allow religious freedom. We have lawyers working on international issues of women’s rights.”

“I’m proud of the law school. I think it’s got a great history ahead of it, yet to be written, but some of that vision is now clear.” 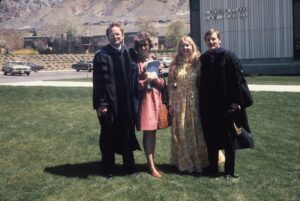 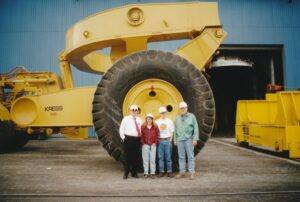