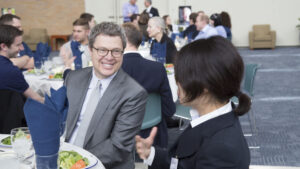 On April 2, 2015, BYU Law invited students who have been offered a spot in the 2018 class to visit campus. Students were able to meet with faculty and current students, ask questions, and form connections. The day was filled with informative sessions, food, and networking.  Before the luncheon, prospective students heard from Dean James Rasband, who spoke on the benefits of attending law school, and especially the virtues of BYU Law itself. “The very best part of this place is the people,” he said.

“Studying law is not just fascinating, but it is also critical. The rule of law is at the core of everything we hold dear. Without thinking much about it, everything we do every day is mediated by the law,” Dean Rasband said. “There isn’t anything better than a law degree for teaching you how to think carefully about hard problems. In that sense, a law degree is the pinnacle of a liberal arts education.  I’m also convinced that a law degree is, at its core, a leadership degree.  There’s no better way to learn to be a leader than to go to law school.”

Dean Rasband expressed that law is not only a leadership degree but it is also a healing degree.  He explained: “As some of you may know, the medieval or early modern tradition recognized only three ‘professions:’ law, medicine, and clergy.  Why was law part of the original three professions?  Partly, I think it’s the idea that all three of those professions were required to swear some form of oath to uphold ethics.  Part of it is the expectation that professionals use their privileged position and specialized knowledge to help others and not just for personal advantage.

“Another key attribute of the original three professions,” noted Dean Rasband, “was that each enjoyed this privilege of confidentiality.”  He quoted former Dean Bruce C. Hafen who explained, “They were all healers, those to whom we open up our inner most secrets when something seems to threaten our very lives physically, spiritually, or in some other way that would destroy our liberty, our property, or our chance to live. We go to them to be healed, to be made whole, and to regain control of our lives.”