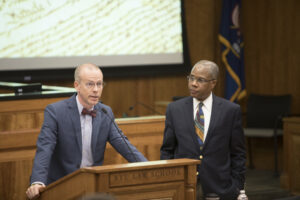 The Federalist Society hosted a debate on March 28, 2017, about what Congress should do with the Affordable Care Act. The debate featured Deroy Murdock, a nationally syndicated columnist with the Scripps Howard News service and a senior fellow with the Atlas Economic Research Foundation, and Greg Matis, Deputy General Counsel to Intermountain Healthcare.

Murdock argued in favor of repealing and replacing the Affordable Care Act. “It tries to do too much with a manageable a problem,” he said. Murdock pointed out that the highly complex legislation has not met all of its intended outcomes, including increasing choice and competition and providing healthcare to all Americans. Drawing on John C. Goodman and Gerald L. Musgrave’s Patient Power: Solving America’s Health Care Crisis, Murdock argued that the way to solve the problems is to “put patients and doctors, not Washington, in control.” He recommended some ideas such as Universal Health Savings accounts, tax-free deposits into HSAs, risk pools, and extending insurance across state lines.