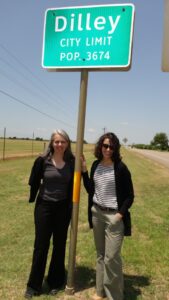 Professional distance is an important quality in an attorney. Client pain and problems will easily lay siege to an unprotected heart. BYU law professors Kif Augustine-Adams and Carolina Núñez volunteered to give pro bono legal services to women seeking asylum in the United States and housed in the South Texas Family Residential Center in Dilley, Texas—the largest immigrant detention center in the United States. Opened in December 2014, it detains women and children who have fled violence in Central America and are waiting for the courts to decide their claims for asylum. Professors Augustine-Adams and Núñez have opened their hearts to this project and opened a way for BYU Law students to help.
They came prepared with expertise: Augustine-Adams writes and researches on critical race and feminist theory and historic migrations, and Núñez researches and writes about immigration law, with a specific emphasis on undocumented immigrants. Both are fluent Spanish speakers.
To see their clients, the professors appeared at the treeless 50-acre facility encircled by a high barbed-wire fence and security cameras, sweltering early mornings through sweltering nights in what had been fracking fields. Only adult women and their children are here—all adult men have been transported to a separate facility.
This facility houses 1,735 people, approximately 1,000 of them children, and is owned and operated by the Corrections Corporation of American (CCA), the nation’s biggest for-profit prison company, and was awarded the contract by the U.S. government’s Homeland Security division. The professors went through metal detectors and entry procedures indistinguishable from those in a regular prison before they could enter the trailer set aside for client interviews.
They were barred from visiting the rest of the facility—barrack-like structures where the women and children sleep, eat, and spend their days and nights. Augustine-Adams opened her heart with her first clients. “Two 14 or 15-year old girls came into the trailer with their mothers. They looked just like my teenage daughter, their long hair wrapped up into buns on the tops of their heads, but they were fleeing violence I wouldn’t wish on anyone: fleeing rape by gangs; fleeing extortion; fleeing the possibility of being captured by gangs for use as sex slaves. Meeting those girls made every minute I spent at the facility vitally important,” said Augustine-Adams.
The isolation was what first struck Núñez. “Dilley is a town of about 4,000 people that has developed around the fracking industry. We were warned to bring our own water with us since the drinking water is reportedly tainted by fracking byproducts, but the tainted water is what the detainees drink. Most of the people we saw were sick with colds and viruses and were suffering from exhaustion. The geographic isolation also makes it difficult for detainees to access legal services. Prior to the development of the CARA pro bono project, most detainees were sent back to the countries where they have been threatened, as these women and children are ill-equipped to navigate the U.S. immigration system. In contrast, over 95% of detainees served by the CARA project are able to leave the facility to a safe place in the U.S. where they can continue to pursue their asylum claims.”
The professors saw first-hand that forcibly returning these women to their homes would be forcibly returning them to a place where they might well be terrorized, raped, or murdered. They were volunteering through a non-profit organization, CARA, founded by attorneys using all- volunteer attorneys, law students, interpreters, social workers, researchers, and simply caring people who come to Dilley, Texas to defend detained children and their mothers. Núñez and Augustine-Adams spent time working on legal briefs, interviewing clients, and most importantly teaching these women how to present themselves and their stories at the “credible fear” interview, a hearing where an immigration judge decides if the petitioners truly have credible fear for returning to their homelands. The professors also spent time caring for the children whose mothers were in the interview process. BYU Law supports this vital work and has created law student externships in Dilley, Texas over fall and spring placement breaks to begin fall of 2016.
This detention facility along with others run by CCA reaped profits topping $75 million in the first quarter of 2016—all moneys paid them from the U.S. government. This windfall is the result of a 2014 immigration policy from the Obama administration trying to prevent the flow of illegal immigration across the Mexican/United States border. Asylum must be petitioned for on U.S. soil, and so the perilous journey from Central America begins north through Mexico to the U.S. border. Some of the women and children present themselves to immigration authorities at the border. Others pay “coyotes” to take them illegally across the border and are intercepted by border patrols. All are sent to the new detention facility. In the last five years, the U.S. and Mexico have returned 800,000 refugees to Central America including 40,000 children.
The countries with the greatest number of detainees—Honduras, San Salvador, and Guatemala—are not tyrannical regimes or in economic crisis; rather, the problem is that criminal gangs are out of control. The homicide rate in El Salvador last year represents a mortality rate of roughly the same magnitude as during the country’s brutal civil war in the 1980s. Massacres, wholesale rapes, and “protection” extortion are laying waste to the population. It is an act of sheer desperation for a woman to take her children and flee northward. Without volunteers lending help and legal support at the border, these women and children face automatic deportation back to the gangs.
For more information about volunteering at the South Texas Family Residential Center see caraprobono.org.