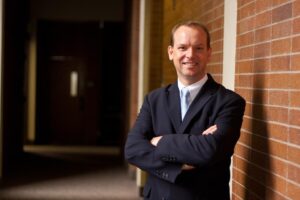 As Gordon Smith, Glen L. Farr Professor of Law, assumed his role as dean of BYU Law on May 1, he announced that Professor David Moore will continue to serve as Associate Dean of Academic Affairs and Research. Professor Moore was originally appointed to the position by former Dean James Rasband on January 1, 2016.

“Professor Moore is an outstanding scholar and admired teacher, who is tireless in his support of colleagues. He is deeply devoted to the mission of BYU Law, and I am grateful for his willingness to continue serving as an associate dean,” Dean Smith said.

Professor Moore is a scholar of U.S. foreign relations law, international law, international development, and international human rights.  His publications have been accepted for publication in the Harvard, Columbia, Virginia, and Northwestern Law Reviews, among others.  Professor Moore has taught Civil Procedure, International Law, U.S. Foreign Relations Law, International Human Rights, Legal Scholarship, and a Plenary Powers Colloquium.  As a teacher, he has been recognized with the University’s R. Wayne Hansen Teaching and Learning Fellowship, the BYU Law Alumni Association Teacher of the Year Award, and the Student Bar Association First Year Professor of the Year Award.