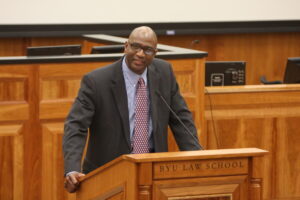 BYU Law’s Black Law Student Association welcomed Keith Hamilton as the speaker for its last event in the Black History Month lecture series on Tuesday, February 24. Hamilton is the first African American graduate of BYU Law and was awarded the Distinguished Alumni Award in 2012 for his public service work.

Hamilton shared how he came to attend BYU Law and where his path has taken him since graduation. He was introduced to BYU Law almost 34 years ago when he took a tour of the facility. He had recently joined the Church of Jesus Christ of Latter-day Saints and was in Provo to report to the MTC.  “Dean Hansen, who was the dean of admissions at the time, gave me a tour of the facility,” Hamilton said. “This is a hallowed building for me.”

Hamilton continued by sharing a brief background of Black History Month that was first recognized in 1976. “President Ford made it a month of celebration for the people of the United States,” Hamilton said. “I always wondered: Was America short-changing us again, giving us a month that was only 28 days out of the year? Through some research, I came to find out that February was actually selected because of Black History Week. It was chosen because of the birthdays of President Lincoln and Frederick Douglas.”

Hamilton expressed deep gratitude for his time at BYU Law, both for the education he received as well as for the doors his time in Utah opened. “BYU was the only law school I applied to, because I figured it would take an act of God to get me into any law school,” Hamilton joked. “But I never take my acceptance here for granted.”