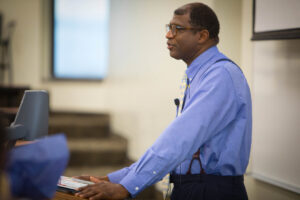 The BYU Law Black Law Student Association hosted Keith Hamilton, the first black graduate of the Law School, as its speaker for Black History Month. Hamilton recounted his experiences at the Law School, talked about the need for diversity and unity, and urged students to be leaders and activists in bettering their communities.

Hamilton began by talking about the major adjustment he faced when he came to law school in Provo from North Carolina as the only black student. “I had a few friends…. but it was difficult,” he said. He longed to develop meaningful relationships with other students, but he often felt overlooked. As he became more known and made friends among his classmates, he came to love the Law School.

Three years later, during convocation ceremonies, he had an experience that significantly affected him. According to his journal, during the exercises, he had been reflecting on how there were many blacks that had not yet realized their rights and many who did not have the opportunity he did. He thought about his parents, grandparents, and “the dark history of the many generations before them.” He felt disheartened as the ceremony went on.

However, as the convocation came to a close, Hamilton said “a change of heart began” and he started to feel a sense of pride.

“I was very proud, not only because I was about to culminate three years of intensive academic study, but also because I was about to make history as the first black graduate of the J. Reuben Clark Law School,” he said. “I became teary-eyed as I attempted to sing the words of ‘God Bless America.’ By the end of the convocation service, I’d had an epiphany in realizing what my daddy, an American hero proved in ‘liberating strife’ and who ‘more than self hiscountry loved,’ had tried to teach me nearly fourteen years earlier.”

Hamilton said that reflecting on his law school experiences in that moment helped him to realize he had come to a new understanding of himself. Continuing to read from his journal entry about convocation, he said, “Through my BYU experiences I have become a different person. I have gained an equal sense of appreciation for all the cultural heritages which have formed the path that led me to that culminating moment of commencement. I felt that I was truly American, African-American, Latter-day Saint, and was grateful for all that that represented. It mattered not to me in the future whether other people would choose to emphasize my race or nationality or my religion in characterizing me. I knew, for myself, that there was a whole of me that defined who I am, for I knew the sum of my whole self to be greater than the sum of all its different parts. I believe the same is true for each and every person.”

Hamilton urged students at the Law School to recognize and celebrate the need for diversity while at the same time to strive for unity with one another as children of God. In keeping with this call for unity and acceptance, he urged students to consider the words of Charles Hamilton Houston, the prominent African American lawyer who served as Dean of the Howard Law School and played a significant role in dismantling Jim Crow Laws, doing legal framework for Brown v. Board of Education, and training future Supreme Court Justice Thurgood Marshall.