Tribal advocates believe generations of Federal Indian policy and chronic poverty have set the stage for unprecedented COVID-19 infections rates among the Navajo Nation. “I became passionate about defending tribal sovereignty and helping Tribes overcome centuries of harmful federal policies, and I decided I wanted to devote my career to that.” – Beth Parker

BYU Law alumni Beth Parker (’06), Clifford Parkinson (’10), and Alisa Lee (’00) anxiously waited as more than 40 planes loaded with 11,000 pounds of desperately needed supplies took off from the Salt Lake City International airport on Wednesday morning⁠—headed to help the people of the Navajo Nation.

“It’s the willingness of all of our partners and volunteers to help that made it possible to mobilize this expansive relief effort so quickly,” explained Parker. 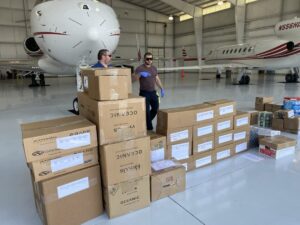 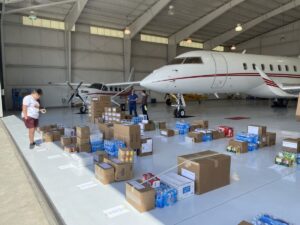 Parker and Parkinson work at the same firm; they met Lee when all three were asked to be part of the Utah State Bar Indian Law Section’s subcommittee called the Indian Child Welfare Act. During a routine meeting, the group decided they needed to help Utah’s Tribal communities dealing with COVID-19. Hours later, Utah Tribal COVID-19 Relief (UTCR) was born.

“It’s a grassroots organization that began as a small idea, and now it’s expanded into this unified effort with partners from Vernal to St. George,” said Parker.

In less than two months, they’ve partnered with more than a dozen private and state entities to  help Utah’s eight federally recognized tribes, raising more than $30,000 in addition to the donated supplies. The ongoing task of organizing collections, and making, and executing distribution plans has involved many volunteers.

“One of our first Zoom calls with all of our partners had about 30 people on, I was literally in tears to see the overwhelming response. People just jumped in and said, ‘we’ll do this,’ and ‘we’ll do that,’ taking time out of their professional and personal lives to make hard things happen.  It’s been overwhelming and humbling,” explained Parker.

Beth Parker’s passion for addressing inequities in Native American federal policy is a family legacy started by her grandfather, Douglas Parker, who was the first professor at the J. Reuben Clark Law School to teach Federal Indian Law back in 1975.

She said, “If you understand Native American history, helping tribal communities becomes a moral responsibility. How can you not help once you know?”

Parker’s desire to help native peoples intensified the day she walked into Larry Echo Hawk’s class as a 2L student. The former United States Assistant Secretary of the Interior for Indian Affairs soon became a mentor and friend, even helping Parker get her first job specializing in Indian Law. Years later, BYU Law School called to ask if she’d temporarily teach the Federal Indian Law class her grandfather started which was pivotal in setting the trajectory of her career. She said, “Yes.”

“Something really poignant was inviting my grandfather in as a guest lecturer on one of the first days of my class. It’s something that we really bonded over, grandfather and granddaughter both teaching the same course,” Parker said.

At first glance, it’s not obvious why this rolling desert landscape, covering 27,000 square miles that includes parts of Arizona, New Mexico and Utah should be the scene of the highest per capita COVID-19 infection rates in the nation. It’s only on closer inspection that doctors see the makings of a perfect viral-spreading storm.

“A lot of homes, in addition to not having electricity, don’t have running water. How can you wash your hands to avoid spreading germs without water?” explained Clifford Parkinson.

While Parkinson’s professional involvement with tribal law is relatively new, he said he’s always felt sympathy for the plight of Native Americans. “These are our neighbors, and there’s no reason why they should be suffering this way.”

With a population of just over 170,000 where only 40 percent of residents have electricity and up to 30 percent lack access to clean running water, health officials say it’s almost impossible to keep the spreading virus in check.

“We hope to help them more easily practice the COVID pandemic lifestyle that all of us have the privilege of being able to practice. It’s a nuisance for us, but it’s an impossibility for them,” said Parkinson. 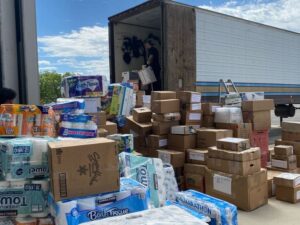 The first trailer load of supplies rolled out two weeks ago headed to the Confederated Tribes of the Goshute Reservation in Ibapah, Utah. The next delivery hauled 7,000 pounds of goods to the Navajo Nation, including desperately needed water. But Wednesday’s air delivery is crucial to get supplies to remote areas of the reservation, including Navajo Mountain where pilots will land on a dirt runway, carefully avoiding livestock.

As the Indian Child Welfare Program Administrator for Utah’s Department of Child and Family Services, Alisa Lee is very familiar with life on tribal lands. She’s a member of the Paiute Tribe whose reservation, Fort Independence, is located in Eastern California. Ancestors on her maternal side have been in that same valley for generations. A convert to The Church of Jesus Christ of Latter-day Saints at nine years old, Lee’s mother instilled a love of Native American history and culture, and encouraged her daughter to attend BYU Law, in part because Larry Echo Hawk taught there.

“How do you serve your community? That’s what I learned from him. He asked us to use our skills, use our talents, use our tools to not just get an education, but to give back,” explained Lee.

Lee is currently the vice chair of her Paiute tribe at Fort Independence, where she travels once a month to oversee tribal business. She said her tribe is fortunate to be on solid footing compared to many of the Utah Tribal communities. 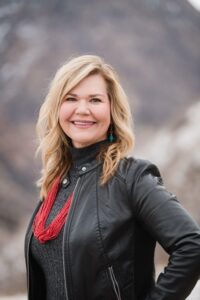 “They already had this structural racism in place, this lack of opportunities, these inequities and then when you have a public health disaster, it just exacerbated and lays bare how the inequities affect this vulnerable population,” said Lee.

The Navajo Department of Health keeps a daily running total of deaths and positive cases. As of June 8 there were 6,110 positive cases and 277 deaths. To try and get ahead of those numbers, Tribal leaders have issued one of the strictest lockdown laws in the nation. Each Friday, residents are required to stay home until Monday morning.

Now that the groundwork is laid to get help where it’s needed most, the group said they plan to keep the organization going through the COVID crisis and well into the future.

The UTCR said the most critically needed items are food, water and household cleaners.

Learn more about the UTCR’s list of needed goods and how you can donate.

And to learn more about the history of the Navajo Nation, visit their official website.

SoloSuit CEO and Alum George Simons (‘19) on Purpose and Excellence

Alumni Board Secretary MJ Townsend (’21): Shaped By My Professors