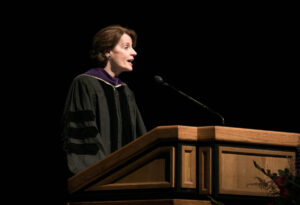 Student speakers Brooke Heard Ellis and Tanner James Bean addressed the audience of graduates and their family and friends along with law school faculty and staff. Ellis reminded graduates of then Dean James Rasband’s remarks to them during orientation, their first week of class three years ago. “Remember to help those in the last wagon when you acquire your professional knowledge and skills.” Ellis said that this message of looking back has defined their class as acts of service between class members were detailed. Bean remembered that orientation week, too, and looking around at the strangers around him and thinking, “These are my people.” He detailed the many ways the class devoted themselves to learning and service and characterized them as “an incredibly caring class.”

Joan Biskupic, currently a visiting professor at UCI Law for the 2016-2017 academic year, CNN legal analyst, editor for Reuters in charge of Legal Affairs, and Supreme Court biographer was the main convocation speaker. She has covered the Supreme Court for 25 years and has written several books on the judiciary, including Breaking In: The Rise of Sonia Sotomayor and the Politics of Justice (2014) and American Original: The Life and Constitution of Supreme Court Justice Antonin Scalia (2009). She is also the author of Sandra Day O’Connor: How the First Woman on the Supreme Court Became Its Most Influential Justice (2005). She currently is working on a biography of Chief Justice John Roberts.

Before joining Reuters in 2012, she was the Supreme Court reporter for The Washington Post and for USA Today. A graduate of Georgetown University Law Center, she was a finalist for the Pulitzer Prize in 2015.

She told graduates they were entering into an exciting and consequential profession. “You will need each other; you will need faculty and staff; you will need friends and family. You are entering into a profession that values money, power, and politics. These people and the people and landscape of your home will ground you.”
Biskupic graduated from law school in the “night school” program at Georgetown after four years. She was working a day job at The Washington Post and didn’t attend her graduation. A friend told her that her name was called during the ceremonies, and suddenly she felt bereft. They had called her name. “Please wear the robe, take the honor, then move on to new challenges. Celebrate your accomplishments with those who helped you on your journey.”

Using examples from the lives of United States Supreme Court Justices, Biskupic pointed to the close relationship between Chief Justice Burger and Sandra Day O’Connor forged before O’Connor was on the Court through personal interactions and a memorable combined family trip to Lake Powell. Burger thought she was warm and legally experienced, and started laying the groundwork for her to move onto a national legal stage which led to her appointment as the first woman on the Court.
Ruth Bader Ginsberg is known for hard work and her preparation. She and Justice Scalia were ideologically apart but shared love of travel, opera, and their experiences of being law professors. They were friends and helped each other with writing styles and reasoning in their opinions. Her first thought when she heard Scalia had died was, “I was supposed to go first.” She and Justice Rehnquist also had strong connections, one of which was cancer treatment. When she joined the Court he told her, “Don’t rule for what the home crowd wants.” She called him “a true mensch—a wise man.”

Biskupic quoted Rehnquist on ethical dilemmas that will arise for every lawyer. Rehnquist was intimately acquainted with these dilemmas having worked with Nixon and many of the people involved in the Watergate scandal. “Know that you will be challenged. You never know in the moment what you will do if your bosses are engaging in conduct that may not be right. You want to do the right thing, but you are loyal to the bosses. You can’t always be certain what you’ll do in the toughest ethical situations.”

“Be ready for those situations,” said Biskupic, “by staying close to your fellow students, siblings, parents, and faculty. These are the people who will sustain you in professional situations in large matters of right and wrong. Accept you will be challenged. Some will not have your best interests at heart. Look around you at who will have your best interests at heart.”