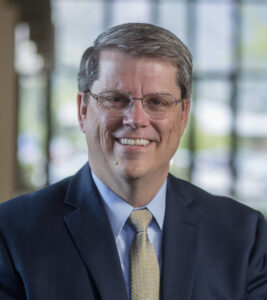 PROVO, Utah, June 2021 – D. Gordon Smith, BYU Law dean, has been appointed as the first occupant of the Ira A. Fulton Chair in the J. Reuben Clark Law School. The chair was established at the Law School in 2020 through a generous endowment for scholarships, mentorships, internships, and/or other experiential learning opportunities. Appointment to a chair at BYU Law is an important recognition given to law school faculty who have a record of high-quality teaching and scholarship. Dean Smith’s appointment was recommended by a special committee composed of current chairholders at the Law School and was approved by the BYU Law faculty.

Clifton Fleming, Ernest L. Wilkinson Chair, professor of law, and senior chair at the Law School shared that the response from the faculty about the proposed appointment was “enthusiastically favorable.” Fleming continued, “The committee was unanimous in its view that Dean Smith was overdue for a chair and is pleased to have played a part in his receiving the Fulton Chair.” Christine Hurt, George Sutherland Chair, professor of law, and long-time collaborator with Dean Smith on The Conglomerate blog and partnership treatises added, “Dean Smith has been such an innovative and successful dean the past five years that it’s easy to overlook the fact that he is easily one of our most prolific and influential scholars in entrepreneurship and business law. I was very lucky to have been mentored early on in my career by Gordon, and this honor is greatly deserved and very overdue.”

As a scholar, Dean Smith is a leading figure in the field of law and entrepreneurship and has done foundational work on fiduciary theory. For his work in promoting the study of corpus linguistics and design thinking in law schools (including co-founding LawX, BYU’s legal design clinic), Dean Smith was included in the 2017 class of Fastcase 50, which honors “the law’s smartest, most courageous innovators, techies, visionaries, & leaders.” 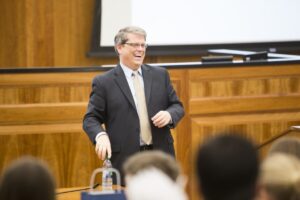 Serving as the head of BYU Law since 2016, Dean Smith has established the Inspiring Leadership Initiative and supported the creation and development of BYU Law’s Refugee and Immigration Initiative and the Community Law Clinic. Also under his leadership, the Law School has established the Legal Technology Initiative; constructed a transformative Innovation Space in the Howard W. Hunter Law Library to facilitate collaboration and design thinking; launched LawX, a legal design lab committed to tackling access-to-justice issues, and pioneered research in law and corpus linguistics. At the invitation of the Utah Supreme Court, Dean Smith has been part of an effort to narrow the access-to-justice gap in Utah by proposing the establishment of the Utah Office of Legal Services Innovation to oversee nontraditional legal services and providers.

Arizona native, Ira A. Fulton, established the Fulton Chair as part of his long-standing and far-reaching commitment to education. A successful and community-spirited entrepreneur, Fulton has owned and overseen a wide variety of successful business ventures, including Fulton Homes which is one of the largest builders in Arizona. He and his late wife, Mary Lou, have helped many students in multiple disciplines at BYU, and have been great friends and generous donors to BYU Law. Named one of the top 50 philanthropists in the United States, Fulton stated, “I’m impressed with the students at BYU…, and when I can participate with these great students and their great professors and help them achieve their goals, that personally excites me.” 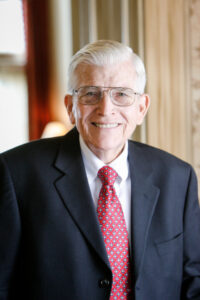 Dean Smith is grateful that Fulton’s generosity will continue to bless the lives of BYU Law students. “It is an honor to be appointed to this chair named after someone I greatly respect as a businessman, philanthropist, and friend,” Dean Smith said. “I feel a great responsibility to carry on the good work associated with the Fulton name.”