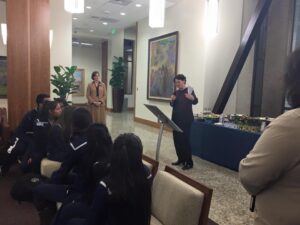 On January 21, 2015, BYU Law hosted a reception to honor members of Living Legends for their contribution to the Annual International Law and Religion Symposium. In addition to expressing appreciation, BYU Law faculty and staff welcomed the opportunity to meet outstanding students with diverse backgrounds and to explore their potential interests in law as a career.

Over the last 22 years, the Symposium has hosted over 900 academic, government, and religious leaders and visitors from 120 countries. These leaders come together at the Symposium to engage in meaningful discussions about principles of religious liberty; the program is designed to explore the principles in a way that resonates with people from across political, religious, and cultural spectra. As part of the Symposium’s annual program, the students of Living Legends perform during an evening reception, after which they mingle with the guests. Delegates to the Symposium consistently remark upon the students’ friendliness, cultural awareness, and interest in international issues. In appreciation for their help in welcoming the world to our campus, the Law School invited the students to join professors and members of the Minority Law Student Association in the Law School’s newly remodeled Fritz B. Burns Memorial Lounge. Professor Elizabeth Clark, the associate director of BYU Law’s International Center for Law and Religion Studies (which hosts the Symposium), spoke to the students, expressing the Center’s appreciation for their heartfelt performances and outstanding work as ambassadors for BYU.

Following her remarks, BYU Law Professor Michalyn Steele spoke to the students about their ability to achieve their dreams and the need to plan now for their future. Professor Steele spoke about her mother, the first Native American woman to graduate from BYU Law, and the impact her mother’s choice had on Professor Steele’s life decisions. Professor Steele’s private law practice specialized in Federal Indian law, and after working at the U.S. Department of Justice in the Civil Rights Division, she became a counselor to (former BYU Law Professor) Elder Larry Echo Hawk while he was serving as the Assistant Secretary of the Interior for Indian Affairs.

After Professor Steele’s remarks, Paige Benjamin, an alumnus of both BYU Law and Living Legends, spoke about his experiences as an attorney working in areas that serve disadvantaged community members in criminal and immigration cases. As Benjamin stated, “By giving people a voice, we can make a difference. There are days when I can come home from work and say that today I made a difference in one person or one family’s life.” As the evening came to a close, the group’s President, Moni Tiatia, led the students in a traditional song of thanks.