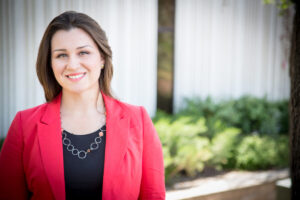 The National Native American Bar Association Foundation recently announced the first six recipients of its scholarship, one of which is a BYU Law student. Brandi Sweet has been chosen to receive the scholarship that celebrates students who demonstrate a commitment to contribute to the Native American community as future leaders.

Sweet has long had an interest in Native American law. “I’m a member of the Turtle Mountain Band of Chippewa Indians. My tribe is located in North Dakota,” Sweet explained. “But what really got me interested in Indian Law was when I spent two years in state custody as a teenager; I was in over ten different foster homes and detention facilities. There’s a law called the Indian Child Welfare Act, which is meant to protect Indian children from removal and to keep them connected to their culture. I was transferred to a place ten hours from my family and home. When your family is very poor, how can you work towards a reunification if you’re ten hours away from them?”

Sweet decided she wanted to help Native Americans avoid these kinds of situations and injustices. “I started studying social and economic conditions in Native American communities. I worked in Washington D.C. for five years in the U.S. Department of Interior in Indian Affairs. I worked with all federally recognized tribes in the nation— there are 566.” But Sweet realized if she wanted to truly impact Native American life, she needed something more in her arsenal. “If I really wanted to make a difference in Indian communities, I would have to have more background in the law. I wrote a lot of documents, but I always had to have an attorney by my side reviewing what I’d prepared. I wanted to make myself a one-stop shop.”

Receiving the NNABA scholarship helps Sweet know she’s well on her way. “It’s affirmation to continue down the path that I’m on with my interests in Indian Law. It’s also really humbling, because obviously there are Native American law students across the nation who are extremely bright and doing good things.”

Sweet has also received a BYU Graduate Fellowship to create Utah’s first Tribal Court Handbook. “It’s really an under-studied area of the law,” she said, “and will be a huge resource not just to the native legal body but our entire legal body in Utah. But, it will be difficult to put a scope together because there are eight recognized tribes, and they all have their own court systems,” Sweet said. “Before you do any work in Indian communities, you have to have the approval of the tribes.”

On June 12, 2015, Sweet will present her project at the Utah Tribal Leaders meeting to obtain a resolution or a letter of support from all of Utah’s tribal leaders to obtain information from their communities and connect with their courts. She will then refine the scope and develop the data collection tool.