“In law school, you are learning how a system of rules influence human behavior, but there is a temptation to lose your bearings, to become so preoccupied with the system, that you forget why we have it,” Dean Smith said. 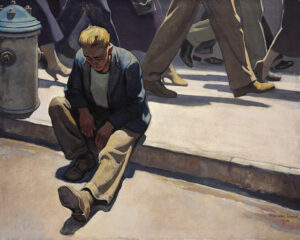 Showing an image of the Forgotten Man painting by Maynard Dixon, Dean Smith said he first noticed the painting in the office of Judge Thomas B. Griffith, a federal judge on the United States Court of Appeals for the District of Columbia Circuit.

Dean Smith encountered the painting again in the office of Elder Dallin H. Oaks, the eighth president of Brigham Young University who oversaw the creation of BYU Law.

“Elder Oaks told me that he often gets drawn into big policy questions and that he never wanted to forget the reason he was doing this work was to minister to the individual,” Dean Smith said.

Paraphrasing Elder Oaks, Dean Smith continued, “I have to be the guardian of the system. I have to think about the fact that when I write an opinion, it will become a precedent for people to follow. I am a guardian to the system.”

Dean Smith emphasized that focusing on individuals is key to becoming a strong leader. He quoted Stephen R. Covey’s definition of leadership to emphasize his point: “Leadership is communicating a person’s worth and potential so clearly that they are inspired to see it in themselves.”