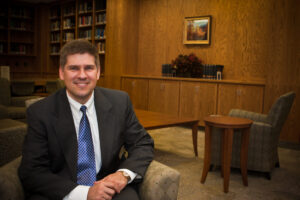 Eric Jensen has taken a year-long leave from BYU Law because the United States Department of Defense (DOD) wants him. On September 1, 2016 he became the Special Counsel to Jennifer O’Connor, DOD’s General Counsel, lending his expertise on international law, the law of armed conflict, and cyber- attacks. Although most of what he does for the DOD is classified, he looks forward to sharing stories of his work with law students when he returns in the fall of 2017 and talking with them about emerging technology.

“At the end of May I went to Arizona with policy-makers, scholars, and scientists to discuss the emerging new cyber technology as applied to war. I was asked what impact cyber technology will have on international conflict and the rules of war, These are important issues with possible devastating effects—they are issues we need to talk about,” Jensen said.

Jensen’s summer travels began just after finals in April when he was invited to be part of the discussion at Penn State with a group on international cyber activity discussing cyber activities related to terrorism world-wide. He attended the Special Operations Command Legal Conference, and talked about cyber activity with lawyers who provide legal advice to military units like the Navy Seals. Meanwhile he was writing about cyber activity prewar and during war and how to assist or constrain it. Next, in Prague, he was with the Defense Institute for International Legal Studies talking about how emerging technology impacts wars and conflict.

In May he was in Rhode Island presenting a paper to an international group on human rights and emerging technologies. He flew to Moldovia where he spoke on peace keeping operations with members of the Moldovan army who are headed to Kosovo as part of the United Nations force there. 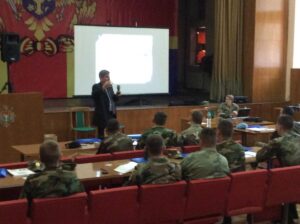 In July he went to Israel with Associate Dean David Moore as a group of law professors invited by Israel where they attended official meetings with government and military officials sharing their views on the law of war. He returned to Rhode Island to work with the Defense Institute for International Legal Studies about how militaries can provide legal assistance to the civilian organizations in cases of civil unrest or disasters. This was an international conference attended by 35 officials from all over the world. Next, he went to Cambodia and met with government and military leaders who want to learn from the United States about international law issues, including recent actions by China in the South China Sea.

Professor Jensen’s scholarship is borne from experience. He has been the Chief of International Law in the Office of the Judge Advocate General for the United States Army, legal advisor to the United States forces in Iraq; Tuzla, Bosnia and Herzegovina; and Skopje, Macedonia. He has taught law in The Judge Advocate General’s School and at Fordham Law School before joining the faculty at BYU Law in 2011. He was in the group of attorneys who prepared the Tallinn Manual on the International Law Applicable to Cyber Warfare, and is currently working on the follow-on to the Tallinn Manual dealing with cyber operations more generally. He is co-author on The Law of Armed Conflict: An Operational Perspective, The Laws of War and the War on Terror, and National Security Law and Policy: a Student Treatise. He is the author of more than thirty law journal publications focusing on international law, national security law, cyber law and international criminal law.