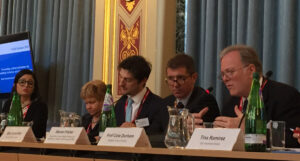 ICLRS Founding Director Cole Durham and ICLRS Center Director Brett Scharffs made presentations at a major conference at the British Foreign and Commonwealth Office on Wednesday and Thursday, October 19-20.

Secretary of State for Foreign and Commonwealth Affairs, Boris Johnson, said, “Our immediate goal is to destroy Daesh, a failing movement that is firmly on the road to defeat. But this conference is about preventing extremism from taking root in the first place by examining how to combat poisonous ideologies at their source.”

Professor Durham spoke of the role of education in building acceptance of different faiths or beliefs among children. He drew upon his experience helping draft the Toledo Guidelines on education about religion, part of an OSCE project.

Professor Scharffs spoke about ICLRS’s educational programs around the world, including Certificate Training Programs on Religion and the Rule of Law in China, Vietnam, and Myanmar, and a master’s level course on Shari’a and Human Rights in Indonesia, as well as programs in Nigeria and Hungary.

The conference was built upon the concept that, “As the international community seeks to understand how best to combat violent extremism it is clear that, to be sustainable, solutions must go beyond counter-terrorism measures to include measures which tackle the conditions that are conducive to extremism.”