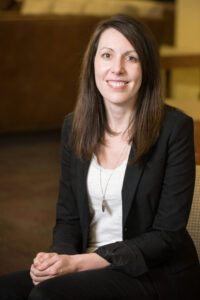 BYU Law Professor Stephanie Bair presented at the S.J. Quinney College of Law’s  colloquium on “Law and Biomedicine” on Wednesday, January 11. She spoke on her article, “Neuroplasticity and Dynamic Rationality: Implications for Advertising Law and Autonomy.”

Professor Bair set the stage for her article stating, “In 1998, Christine Jolls, Cass Sunstein, and Richard Thaler published “A Behavioral Approach to Law and Economics.” Their article proposes a departure from the previously dominant classical law and economics approach to legal analysis. Building on classical law and economics’ rational actor construct, the authors rely on empirical insights about human behavior to introduce the concept of the cognitively and motivationally limited boundedly rational actor.

“Over the past two decades, the behavioral law and economics approach, with its focus on the boundedly rational actor, has contributed needed realism to positive, prescriptive, and normative analyses of law. But to date, it has largely ignored an important fact, grounded in the neuroscientific concept of neuroplasticity. Because of neuroplasticity, rationality is not static, but a dynamic characteristic that can be molded over time by specific laws and policies.

“By overlooking the dynamic nature of rationality, behavioral law and economics is failing to reach its full potential. This has serious consequences not only for legal analyses, but also for the prescriptions and policies that flow from them. In some cases, the overlooked consequences of dynamic rationality might even lead us to enact policies that undermine, rather than advance, the very policy goals we seek to achieve.

“In this article, I take the first step in remedying this oversight. Drawing on the insights of neuroscience, I explain why rationality is dynamic, and what this means for behavioral law and economics. Working from examples in advertising law, I show that the overlooked phenomenon of dynamic rationality has led to policies that undermine the goal of consumer autonomy the policies were originally meant to advance. I show that this oversight can be accounted for in much the same way that bounded rationality is currently handled—by incorporating relevant psychological insights into positive models of decision-making. Doing so should increase the prescriptive and normative power of behavioral law and economics going forward.”

Professor Stephanie Plamondon Bair is an associate professor of law at BYU Law School. She arrived at BYU Law from Stanford, where she was a fellow with Stanford’s Program in Neuroscience and Society. Prior to this, she spent time as a patent litigation attorney at Goodwin Procter in Boston and as a clerk for the Honorable Raymond C. Clevenger III on the Court of Appeals for the Federal Circuit in Washington, D.C.

Professor Bair’s research focuses on mind sciences, innovation, and the law. She is particularly interested in applying empirical work in psychology and neuroscience to current legal and policy challenges in intellectual property law, public health law, criminal law, and other areas. Her recent legal writing has focused on the psychological underpinnings of the patent incentive.

Before graduating from Harvard Law School, Professor Bair earned a Ph.D. in Neuroscience from the University of Utah and an undergraduate degree in Physics from the University of Prince Edward Island in her hometown of Charlottetown. Her legal writing has been published or is forthcoming in the Boston University Law Review and the Connecticut Law Review, and her science writing has appeared in Nature and the Journal of Comparative Psychology.