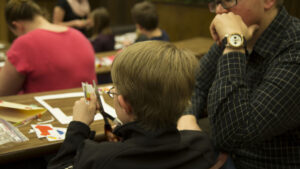 While on the hunt for a law professorship in 1997, Brett Scharffs headed to Georgetown University. Although a teaching position at Georgetown would have suited him well, there was something else he found instead.

During the interview process, Professor Scharffs met a Jesuit priest who was also an acting professor at Georgetown. He was the leader of a mentor program that brought inner-city elementary school kids to Georgetown for one-on-one mentoring with a law student. The program’s purpose was to instill a love of learning, a sense of community, and to help the school kids feel invested in by an adult. Impressed by the dedication to community, teaching, and learning displayed by this professor, Professor Scharffs resolved he would do the same wherever he landed.

At first, Professor Scharffs wondered whether there was anything equivalent to an “inner city” school that needed serving in Provo, Utah, a stereotypically homogenous community. What he learned is there is always a need, no matter the perceived economic circumstances. In an article written by Professor Scharffs in 2002 about the program’s early successes, he explained the need for a program in Provo in this way: “On the east side of the Interstate, numerous children grow up expecting to attend college; however, for many children on the west side, the prospect of college is more remote.” He continued, “If a mentoring program is needed in Provo, then it is difficult to imagine any city in the country where one is not needed.”

Although the program has seen no major obstacles, there were a few bumps along the way. One of the most impactful issues was the cost of bus fare in transporting students to and from the Law School. This cost was borne mostly on the shoulders of the school district, which eventually caused Sunset View Elementary to cease working with the Law School. In the search for a more feasible alternative, Professor Scharffs met the coordinator for mentor programs in the Provo School District, Cora Barrett, who has been the program’s liaison for 14 years. Professor Sharffs and Barrett established a relationship with Wasatch Elementary in 2000, where the fifth graders are now a three-minute walk from the Law School.

The shift from a 20-minute bus ride to a three-minute walk has positively affected the program in more ways than just finances. According to Professor Scharffs, this shift altered the program’s focus to a perspective he had never considered; something he called “moral proximity.”

“A lot of time we try to provide service far away from us and we neglect our neighbor,” he said. “I think there is something quite lovely and quite meaningful about providing service to [our] neighbors: to these kids who can see the Law School but have never been in it.”

Professor Scharffs’ paradigm shift in viewing the benefit of community service as an immediate connection to “neighbors” shaped the way law students were taught to serve. Camie Wood, 3L, who served as one of two student leaders of the program in 2013, said her mentoring experience as a first-year law student taught her the greatest benefit is that the kids come to realize they are important.

This lesson came after Wood was assigned to mentor three young girls, one of whom was timid, quiet, and very studious. Wood had trouble connecting with this girl at the beginning of the year, but saw improvement as Wood showed she cared about the girl’s experience in the program.

“As the weeks progressed, she significantly changed,” Wood said. “In one of our down times, she told me she loved coming to fifth grade mentoring because she could just be herself and have fun. It was amazing. I did nothing that was earth shattering; I just gave [her] my undivided attention, genuinely cared, and gave [her] an opportunity to have fun. In return I had a great time.”

Wood hopes that the fifth graders remember the feeling of importance and community they had while in the mentoring program. As the student leader, her job was to organize activities that allowed law students to interact with their mentees on a personal level. For example, the end-of-the-year activity, which program participants work toward all year, is a mock trial.

“The kids work with their mentors to learn about the ‘case,’” Wood said. “Each fifth grader will get a part: judge, bailiff, juror, prosecutor, defendant, etc.; then they will learn their part and try the case. This is a fun opportunity for the law students to use some of the knowledge they have learned while the fifth graders get to see what happens in court, and everyone has a great time.”

Barrett also recalls the effect moral proximity had on a particular fifth grader. “I mentored a girl who struggled academically,” she said. “But several years later, she came back as a law student and mentored others.

BYU Law School’s Youth Mentoring Program has had significant effects on the immediate community of students and families for 15 years.