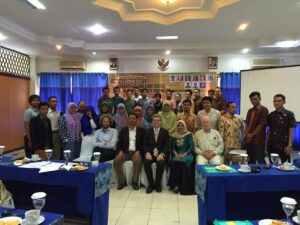 On May 30, 2016, the University of Muhammadiyah, Malang, Indonesia, The Oslo Coalition of Freedom of Religion or Belief, Norway, and BYU’s International Center for Law and Religion Studies announced the creation of the first-of-its-kind Master’s Degree Program on Sharia and Human Rights at Muhammadiyah University in Malang, Indonesia. The announcement marked the fifth annual Master’s Level Course on Sharia and Human Rights held at the University, which ICLRS Director and BYU Law Professor Brett Scharffs has helped organize and teach.

The first ten students admitted to the Master’s Degree program were among 35 students from many parts of Indonesia who participated in this year’s MLC, which was held in Malang from May 30-June 3, 2016. Thanks in part to a grant from the Asia Foundation, these ten students will have their costs covered for the two-year program. The Master’s Degree program will be formally launched Fall Semester, 2016.

The program is the product of a partnership between the University of Muhammadiyah, Malang, Indonesia; The Oslo Coalition of Freedom of Religion or Belief, Norway; and BYU’s International Center for Law and Religion Studies. Professor Scharffs has participated for each of the past five years in planning and teaching the course. Scharffs explained, “The goal of the course, and now the Masters Degree program, is to build bridges between legal systems and worldviews that often seem to be separated by a chasm so large as to seem insurmountable. This course is built upon the proposition that meaningful dialogue between Sharia and Human Rights is not just possible, but important.”

The theme of this year’s course was “Background and Core Issues in Contemporary Indonesia.” Professors participating in the MLC this year included Professor Syamsul Arifin, the newly appointed Vice Rector of the Universitas Muhammadiyah, Malang, Indonesia; Dr. Ahmad Nur Fuad, an expert in Islamic law from the IAIN Sunan Ampel, Surabaya; Professor Tore Lindholm, a philosopher who specializes in both human rights and Islamic Law, the University of Oslo, Norway; Ms. Cekli Pratiwi, LLM, an expert in human rights law at the Universitas Muhammadiyah, Malang; Professor Mun’in Sirry, an expert in interfaith dialogue, University of Notre Dame, Indiana; Professor Brett G. Scharffs, an expert on international and comparative law and religion, Francis R. Kirkham Professor of Law at BYU Law School and Director of the International Center for Law and Religion Studies; and Professor Jeroen Temperman, an expert in human rights and Editor in Chief of the scholarly journal, Religion and Human Rights, Erasmus University, Rotterdam, the Netherlands.

A related program, also an outgrowth of the MLC, a “Short Course on Sharia and Human Rights,” was held the previous week at the University Gadjah Mada, in Yogyakarta, Indonesia.

A textbook designed for teaching a course on Sharia and Human Rights is in the works and scheduled for publication in 2017. It will be published in both English and Bahasa Indonesia and will be edited by Syamsul Arafin, Ahman Nur Fuad, Cekli Pratiwi, and Mahaarum Kusuma Pratiwi.