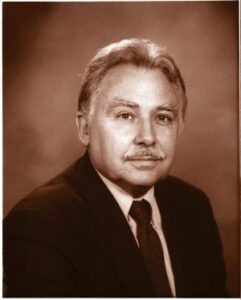 The Honorable Monroe G. McKay, circuit judge for the United States Court of Appeals for the Tenth Circuit since 1977 passed away of natural causes on Saturday, March 28, 2020. Judge McKay was the first former full-time faculty member of BYU Law to hold the position of appellate judge and chief judge in a federal court.

Judge McKay graduated from Brigham Young University with a Bachelor of Science Degree in 1957 and received a Juris Doctorate from the University of Chicago in 1960. After graduating from law school, he ​began his legal career as a ​law clerk​ to Justice ​Jesse Addison Udall​ of the Supreme Court of Arizona​ from 1960 to 1961, before becoming an associate at the ​Phoenix​, Arizona,​ law firm of Lewis and Roca (now Lewis Roca Rothgerber Christie LLP) from 1961 to 1966. Judge McKay became a partner in 1968 and continued working there until 1974. He took leave from his firm to serve as Director of the ​United States Peace Corps​ based in ​Malawi​, Africa​, from 1966 to 1968.

In 1974, Judge McKay accepted an invitation from Dean Rex Lee to join the faculty of the newly formed J Reuben Clark Law School at BYU. The two met as freshmen at BYU, and when Lee was appointed as the first dean of the new BYU law school, he wasted no time in recruiting his friend Monroe McKay. “He was one of the ones who advised me on some important things about my upcoming expectations at the law school,” President Lee has noted.1 McKay joined the faculty the same year as J. Clifton Fleming, the current Ernest L. Wilkinson Chair and Professor at BYU Law. James D. Gordon, BYU Professor of Law Emeritus and former Associate Academic Vice President for Faculty at BYU, served as a law clerk to Judge McKay.

Judge McKay taught at BYU Law until his appointment to the federal bench by President Jimmy Carter on December 1, 1977. He served as chief judge for the Tenth Circuit from September 16, 1991 until December 31, 1993. On January 1, 1994, he assumed senior status and continued as such until his passing. Judge Monroe was a member of the Utah Salt Lake City Chapter of the J. Reuben Clark Law Society. His expertise was in the field of Constitutional Law.