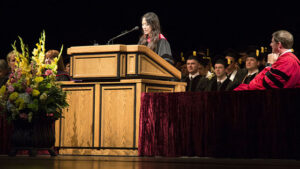 The graduating class of 2015 heard from two outstanding students, Sarah Jenkins and Grant Arnold, along with convocation speaker, Amy Chua, the John M. Duff Jr. Professor of Law at Yale Law School, who is known for authoring Battle Hymn of the Tiger Mother. The commencement exercises were held Friday, April 25, 2015.

As representatives of the class, Jenkins and Arnold shared a common thread in their speeches—the high caliber of their graduating class. Jenkins emphasized that while she originally wasn’t going to attend law school, now, it is a “sobering” thought to think of missing that opportunity, particularly with how wonderful her classmates are. She spoke of them as having many impressive qualities including leadership and brilliance.  Most importantly, she admired how caring, compassionate, good, and strong they are. Grant also spoke of the class as people who have become best friends. At the same time, he stressed that they didn’t get where they are by themselves. He spoke both of celebrating friendships and honoring sacrifices. Ultimately, he said, the real test isn’t law school exams but how you treat other people. The real test at BYU Law is learning the laws of man in light of the laws of God.

Jenkins and Arnold’s remarks were followed by those of Professor Amy Chua. She said that from the time she wrote, Tiger Mother and appeared on the TODAY show alongside Jersey Shore star Snooki, her life has never been the same. With the first question in her interview being, “Yes or no, are you a monster?” she recalled that there were a lot of dark moments during the “tiger mom firestorm.” She advised the class of 2015 to use adversity and struggle as a path to growth and stated those things make a person not just stronger, but wiser.

Professor Chua’s first point was that being an “outsider” or part of a “peculiar” group can be a source of strength if you hold on to your beliefs and who you are. Her parents arrived in the United States in 1960, and although she and her three younger sisters were born in America, they were raised as what she called “quintessential outsiders.” Despite the high academic expectations and strict rules imposed by her parents who strived to preserve their Chinese heritage, Professor Chua recalls only a “wonderful and joyous childhood.” She paralleled Chinese culture to Mormon culture and suggested that perhaps members of the Mormon faith are “outsiders” themselves. Ultimately, she stressed that there is a sense of exceptionalism that comes with not quite being accepted and that it can be a powerful motivator.

Second, Professor Chua spoke about one’s quest to find oneself in the law. She remarked that although she did well, law school did not come naturally to her. At graduation she felt lost. After deciding that a law firm job wasn’t for her, she applied to teach at 100 law schools…and got 100 rejections. When she called her father, he stated, “You got 100 rejections, and you want to give up?” After sending out more applications, she finally got an offer. In addition to teaching, she enjoys researching and spoke of her work regarding revolutionary periods in Mexico’s history, the backlash after the collapse of the Soviet Union, and her research on groups, including Mormons. Professor Chua’s advice is that although it may take a while to find your calling, the only way to be really successful is to do something you believe in.

Stemming from her struggles as a parent, her final point was to be open to change. She emphasized that despite their strict upbringing, she and her sisters love their parents, and they even “voluntarily vacation together.” Referring once more to Tiger Mother, Professor Chua mentioned her growth as a parent. She said that her struggles with parenting, including her fear of losing one of her daughters and also finding out that her younger sister had leukemia, both contributed to some of the hardest times of her life. She emphasized the strength of being self-reflective and aware of your own weaknesses. Ultimately, her advice was to be strong enough to hold onto your values but also to change if you need to.

Professor Chua closed with five final bits of advice. First, go for it and don’t let fear hold you back. Second, don’t make excuses. Third, find your comparative advantage, because everyone has individual gifts. Fourth, reject heaviness and bitterness. Finally, be generous, and that will always make everything better. She left these inspiring words to the graduating class with a final message: you can do incredible things!