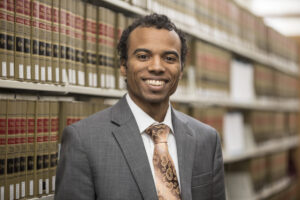 Graduating student Bradley Rebeiro describes law school as an “enlightened sense of community.” From the first day of class, Rebeiro realized that his relationships with members of the law school community would shape his law school experience. “The first day was very daunting,” he said. “I instantly felt as if someone made a terrible mistake in accepting me into a class of so many distinguished individuals.”

It was not long before Rebeiro realized that having bright classmates was a great benefit. In one of Rebeiro’s first-year classes, a student shared the thought that although they were all competing with each other, they were tied together through their mutual struggle in the present and their hopeful success in the future. “This commenced the changing of my sense of community,” Rebeiro said. “I realized that everyone was here not only to improve themselves, but to learn and to aid those around them.”

Rebeiro thought his sense of community was broadened intellectually as he took classes such as Comparative Constitutional Law, Jurisprudence, and Negotiations, which challenged him to think about the members of a community that law affects. “These classes demonstrated that the picture is almost always bigger than we initially surmise,” he said. “Realizing that people come from various backgrounds, and trying to truly understand those backgrounds, helps in problem-solving and coming to proper conclusions.”

As Rebeiro sought to be involved in the BYU Law community, he participated in the International Center for Law and Religious Studies and the Federalist Society. He had the privilege of meeting with dignitaries and leaders of religious faiths from all over the world in his work with the Center. “Learning from exceptional religious leaders from various faiths and witnessing them come together for the mutual benefit of all faiths was remarkable,” he said. “No matter the faith or country, all were seen as equal participants in the quest for religious freedom.”

Rebeiro enjoyed helping the Law School entertain scholars and practitioners of varying political persuasions while he served as president of the Federalist Society. “The debate events and conversations were truly enlightening,” he said. “Through these platforms, the law school experience helps broaden the scope of interactions for students.” Rebeiro feels that his involvement in these activities has helped him better understand important issues and develop appreciation for varying viewpoints.

As Rebeiro leaves law school to begins work at Ballard Spahr Andrews & Ingersoll in Salt Lake City, he believes the sense of community he gained from the BYU Law experience will provide confidence as he embarks on his career. “Assimilating into the law firm will be much easier with not only the technical skills I received but also the qualitative skills that I gained with a unique law school experience at BYU,” he said. Rebeiro is confident that those same skills will carry with him no matter where his profession may take him. “Law school has shown me that each new environment is not a hindrance,” he said. “Rather, it is an opportunity to expand one’s experiences and community.”