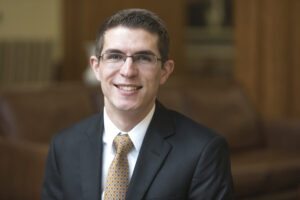 Daniel Chavez’s life direction changed after he walked in his second-year Federal Income Tax class. “From the first class, Professor Fleming had me converted,” Chavez said. Chavez found tax law fascinating. “[It] challenged me in ways other areas of the law did not,” he said. “That class opened a whole new world to me.”

Chavez’s interest led him to apply for the Internal Revenue Service’s Chief Counsel Honors program. He was selected for a job with the IRS Chief Counsel during the summer after his second year. He worked in the Procedure and Administration Division, coordinating the Chief Counsel’s positions on complex procedural questions that arise during litigation. He also reviewed and referred Tax Court cases to the Department of Justice that the IRS had an interest in appealing and worked closely with attorneys nationwide to advise them on current IRS litigation positions.

Chavez spent the semester preceding his summer job in a volunteer position at the local Salt Lake office for Chief Counsel. Upon graduation, he will begin his career with the Chief Counsel’s Honors program in the Los Angeles field office. “I can hardly wait to begin my career with that office!” he said.

But Chavez’s decision to attend law school at BYU was not easy. He remembers sitting across from the Dean of Admissions as an admitted student and voicing his concerns. “I pointedly asked whether the law school’s [motto] of ‘law in the light’ was a reality in the classroom or not,” he said. “I only wanted to come to BYU if I was going to get something different than I would at any other law school.” The Dean of Admissions assured him that it would be a different experience than anywhere else. “I decided in that moment that I would attend BYU Law and I have never looked back,” he said.

While at BYU Law, Chavez had the opportunity to work as a research assistant for Professor Cheryl Preston. Chavez says working for Professor Preston “enriched [his] law school experience” as he developed his research, writing, and editing skills and received valuable mentorship. “In many ways, she helped me to see my potential and she encouraged my participation in the BYU Journal of Public Law,” he said. Participating as Editor-in-Chief of the Journal turned out to be “one of the most rewarding experiences of law school” for Chavez. “I would not have qualified for that position without the experience I gained under Professor Preston’s supervision,” he said.

Reflecting on his experience at BYU Law, Chavez says that the environment of the Law School was a significant blessing. At the beginning of the experience he feared the demands of law school could be detrimental to his life, so he took action to prevent that. “I made three goals at the outset of law school: stay close to God, stay close to my family, and do well academically,” he said. “Every classmate and professor and every class and co-curricular made achieving these goals possible. I am a better person today not in spite of BYU Law, but because of it.”