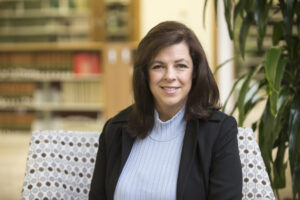 Graduating student Kathleen Meredith waited more than ten years to come to BYU Law, but she says it “was more than worth the wait.” She initially applied to BYU Law when four of her five children were in their teens. At the time, she promised her family that the response from the Law School–whether she was accepted or denied–would determine what the right choice was for her.When she was placed on the waitlist, she knew she had received an answer that did not rule out attending law school, but indicated she should wait. During the next decade, Meredith taught in Denver’s inner-city schools, assisted in marketing a nationally-recognized public author and speaker, and ran a small business. She also continued to follow BYU Law’s website and faculty publications.

When her oldest daughter graduated from college, and two other children began their undergraduate studies at BYU, Meredith felt the time was right to pursue her dream of attending BYU Law.  After she was accepted, she and her husband sold their family home in Colorado and relocated with their two children still at home to Provo.

For Meredith, the people with whom she associated at the Law School enriched her experience beyond her expectations. “I feel so privileged to have had the opportunity to study legal theory from highly accomplished and prestigious, world-class scholars,” she said.  In addition, Meredith’s classmates had a positive impact upon her: “I am forever grateful for the insights I have gained studying alongside tremendously intelligent and talented classmates who have become dear friends and colleagues.”

Studying law at BYU not only presented many opportunities for Meredith to stretch herself intellectually and academically, but also provided the opportunity to develop practical skills and to serve others through clinical work. According to Meredith, the clinical work that she did provided her with the opportunity to interact with local attorneys and to assist those in the community who would not otherwise have had access to those legal services the clinics provide. Meredith gained valuable experience and insight by assisting start-up companies at different stages of development in the Law and Entrepreneurship Clinic, working with families of modest means in the Family Law Clinic to resolve child custody and marriage dissolution issues, and facilitating conflict resolution in small claims court and other disputes at the Center for Conflict Resolution.

Meredith’s time at BYU Law has enriched her life and will enable her to continue to serve others in the future. “Attending BYU Law has refined my abilities to think critically about complex legal and societal issues, obtain and hone skills necessary to practice law, and most importantly, use those skills to serve others in meaningful and lasting ways,” she said.  “For me, BYU Law has been life-altering, exquisitely demanding, and a joy beyond anything I could have expected or imagined. BYU Law School was more than worth the wait.”