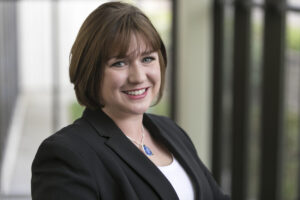 After graduating and taking the bar, SBA President Laura Shrum will relocate to Washington, D.C., to begin work with the United States Nuclear Regulatory Commission as an Honor Law Graduate in the Office of General Counsel. Shrum worked for the agency last summer and is excited to return. “I knew I wanted to practice environmental and energy law before law school, but I could not have imagined working for such an amazing government agency,” she said.

In her position, Shrum will participate in administrative litigation involving nuclear power plants and nuclear materials. “I will have the opportunity to review environmental impact statements and draft proposed regulations for new or revised safety standards,” she said.

In addition to Professor Nielson’s class, Professor Kif Augustine-Adams’ Social Policy and Feminist Legal Theory Class had a major impact on Shrum. “It challenged my notions of the world and of my legal career,” she said.

Speaking about Augustine-Adams, Shrum said, “Rarely do you find a professor who cares as much about her students. Knowing I could take classes from her kept me going through a particularly challenging first-year experience. It was entirely worth it. That is true of my whole law school experience at BYU: worth it.”

As Shrum departs from BYU Law, she carries many meaningful memories with her. One of these memories came in the form of a nomination for an award during her first year. The anonymous commenter said, “Laura Shrum has the kind of determination and attitude that encourages women around her not to quit when the going gets tough. When I read the words ‘tenacity’ and ‘drive,’ I think of Laura Shrum.” That moment had a big impact on Shrum. “It made me realize that my actions as a student or practicing attorney do not go unnoticed,” she said. “We have the opportunity at law school through internships, clinical alliances, and even our friendships to help those in need and inspire change.”

Shrum will also remember serving as the SBA president, a position in which she focused on opening dialogue between the faculty, administration, and students. “I listened to students’ opinions and talked to faculty and the administration about student issues,” she said. In addition to opening dialogue, Shrum also helped organize the SBA’s annual activities and introduced new activities, such as a 2016 Election Party.

Of all her experiences, Shrum says that getting to know her fellow classmates through various co-curricular activities has been the most meaningful. “The greatest aspect of BYU Law has been getting to know the other students,” she said. “We learn a great deal from our professors, but we learn a significant amount from each other.”