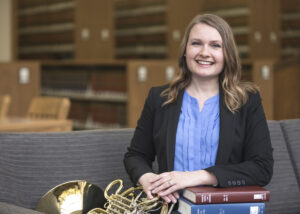 A mother, wife, and musician, Madelyn Blanchard found herself at a crossroads in 2012 when her husband unexpectedly lost his union job. Blanchard and her husband witnessed the law in action as the union attorney filed a grievance against her husband’s employer for not following its procedures to give employees feedback. “My eyes were opened to a new world, one where words in a contract mattered, and attorneys knew what those words meant,” she said. Blanchard was intrigued and wanted to learn about the law so she could advocate for others.

Blanchard enrolled in law school with the desire to strengthen her writing, increase her capacity to think on her feet, and develop the ability to argue on behalf of a client. Having studied French horn performance in Chicago ten years earlier, Blanchard was delving into a discipline and profession markedly different from her past.

In pursuit of her objectives, Blanchard participated in three national moot court competitions. “The experience of researching, writing, and preparing for oral argument got a little easier each time,” she said. “Participating in these competitions gave me more confidence to use my skills in the real world.”
Blanchard had the opportunity to use her oral advocacy skills in the real world when she testified against a bill at a Utah Senate Judiciary Committee meeting while enrolled in the Legislative Clinical Alliance course.  “I saw firsthand how the ability to analyze proposed legislation, spot issues, and articulate those concerns can have an impact on the laws in my state,” she said. Following Blanchard’s testimony, the bill’s sponsor amended the bill to address some of the concerns she expressed.

Even with the heavy demands of law school and Blanchard’s extra-curricular activities, she has continued to play the French horn as a member of the Orchestra at Temple Square. Last summer she spent three weeks on tour in Europe with the Mormon Tabernacle Choir playing in some of the finest concert halls in the world. “It was something I never expected to have the opportunity to do,” she said. “It was a good reminder that the Lord will use whatever talents and skills we have to further his work.”

As Blanchard looks forward to the future, she says she will take with her the courage to dream big and believe in herself. “I heard Professor Michalyn Steele say, ‘Don’t clip your own wings.’ Never underestimate what doors will open to you from your sheer determination to open them,” Blanchard said. “I have had opportunities in the last three years I never would have dreamed of.”