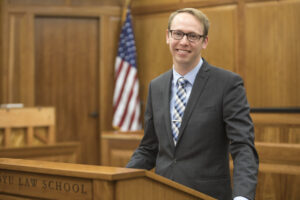 Tanner Bean developed a love for trial work during law school and plans to pursue a career in litigation following graduation. “More than anything, being a part of BYU Law’s trial advocacy team was the most formative experience for me during law school,” he said.

As a first-year law student, Bean applied what he learned in his Torts and Civil Procedure classes in the Woody Deem trial competition alongside his partner Brooke Ellis. Together, they learned what it was like to represent a client, how to interpret and explain legal concepts, and how to apply the law to a set of facts. “It was the first time in law school that I felt absolutely sure about my choice to become an attorney,” Bean said.

In his second-year of law school, Bean became more involved in the trial advocacy program by serving as vice president. In addition to those responsibilities, he had the opportunity to travel to Oklahoma City on the traveling competition team representing BYU Law at the Texas Young Lawyers Association/American College of Trial Lawyers regional competition to present a civil case. Through this experience, Bean learned about opening and closing statements, direct and cross-examination, and evidentiary arguments from his coach, Peter Leavitt. He and his partner Caroline Lamb became regional finalists.

As a third-year law student, Bean became president of the trial advocacy program. Bean worked tirelessly to ensure that practitioners were coming to the school to teach students trial skills, to increase participation in the program itself, and to improve the competition experience for the students. “One of my proudest moments was when we successfully brought 40 practitioners to the school to judge the upper-class competition,” he said.
Bean is grateful for his experience with the trial advocacy program. “I’m thankful to BYU Law for allowing such a strong student organization to grow into a potent force for good,” he said.

During his third year, Bean returned to the national stage to compete again at the Texas Young Lawyers Association/American College of Trial Lawyers competition, this time in Missoula, Montana. Alongside partners Morgan Luedtke and Mary Mottaghian, they took on a criminal case and progressed to the semi-final round. Leavitt told Bean that he was “the greatest advocate [he’d] seen in years.” This praise has fueled Bean to pursue trial work in the future.
In addition to participating in the trial advocacy program, Bean worked in the Litigation Division of the Utah Attorney General’s Office, doing research and motion drafting for state court, federal court, and even U.S. Supreme Court litigation for various issues in civil rights, constitutional and statutory defense, state education, subrogation, and employment law. Bean also worked in the Criminal Appeals Section of the U.S. Attorney’s Office for the District of Utah, conducting research and writing criminal appeals.

After graduation, Bean plans to work in a judicial clerkship with the Honorable Judge Molly Huskey on the Idaho Court of Appeals. Later, his goal is to enter civil litigation, specializing in trial work. “I’d love to join a boutique trial firm so the day-to-day of my practice will be filled with trial-fueled excitement,” he said.