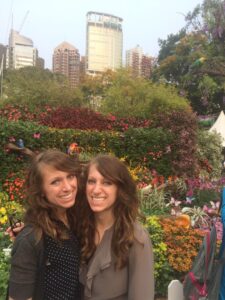 It is not uncommon for law students to find another student who shares a common interest or even has the same undergraduate degree; but for two upcoming BYU Law graduates, the similarities don’t seem to stop.

“We share the same interest in chocolate, pop culture, movies, and celebrity gossip,” said Courtney Feinauer. “It’s in our DNA, as we are, after all, 99.99 percent identical.” For the past three years, Courtney and Cassidee Feinauer have frequently been found sitting next to each other in class, participating in the same  study groups, and engaging in the same co-curricular activities. They have been, after all, fairly inseparable since birth.

Prior to law school, Courtney and Cassidee shared the same English major and editing minor at Brigham Young University. As they were finishing their undergraduate degrees, Cassidee had the idea to attend law school. While this idea had not been on Courtney’s radar, she quickly got on board and decided to apply as well.

“We have competed our entire lives, and being admitted to law school was another competition,” Cassidee said. “Luckily, it’s a competition we both won.”

While preparing for law school, the twins took the LSAT together; however, the proctor would not let them sit in close vicinity during the test in case it gave them an advantage. Courtney joked, “Or, use our mythical twin telepathy—since twin telepathy can be stopped by distance.”

When Courtney and Cassidee reflect back on their law school experience, they both say they appreciated having a constant friend and “doppelganger” to help endure long hours of reading and studying and to enjoy the social interactions and networking.