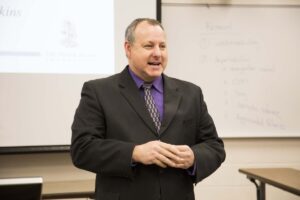 President of the Never Again Foundation, R. Keith Perkins, addressed BYU Law students on April 4, 2016, about the relationship between the legal mind and the heart. “I absolutely believe that we should follow our heart and listen to what it is telling us to do and then use our legal skills to make it work,” Perkins said. “I’m talking about doing the right thing that you really know you should be doing.”

Perkins told students that in law school it is easy to have the desire to use the law to do what is right. However, when students enter the legal field, he said they are “going to feel a lot of pressure to change.” Possible deterrents from doing right may be to focus on financial incentives or personal prestige. “If you let your mind over rule your heart, it can lead you to places you never wanted to go and lead to your destruction,” he said.

Perkins recounted his own life experiences, describing moments when he followed his heart and those when he did not. He explained that at one point in his career, he decided he would only follow his heart. “That decision was a pivotal moment for me, and it changed my legal career,” he said. Soon thereafter, Perkins started the Never Again Foundation, a nonprofit organization that provides free legal assistance to persons affected by domestic violence. He explained that the idea of representing domestic violence victims in civil court, and for free, was unheard-of at the time. “I had no model, no precedent, but I felt like it was the right thing to do. I felt so strongly about it. It was absolutely irresponsible if you look at it through the mind; but through the heart it was all I could do,” he said.

Perkins challenged students to make the same commitment to follow their hearts–to do what they know to be right, not just economically feasible. “I want you to know that there’s so much good that can be done in the law,” he said. “If it feels like the right thing to do, have the courage to do it.”