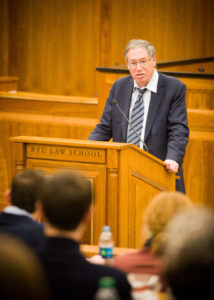 Professor Epstein’s topic for the lecture was the future of compulsory unionization. It is a “subject of extreme importance and extreme difficulty,” he said. He began by examining its evolution. The first rules had nothing to do with statutes that governed labor law, but rather, the body of rules was designed to preserve competition in labor law. He began his analysis with Loewe v. Lawlor, a unanimous Supreme Court decision in 1908 that outlawed secondary boycotts by unions as violating the Sherman Antitrust Act. Hitchman Coal and Coke Co. v. Mitchell followed in 1917, where the Supreme Court held that it was unlawful for an agent of the union to try to unionize workers of a mine who had contracted not to become union members.

By the 1930s, those decisions were reversed, and there followed a succession of labor statutes which resulted in unions having a monopoly power over members. From there, Professor Epstein said, the system gets more complicated. In the public sector, the 1935 National Labor Relations Act did not cover public workers until the 60s.

In 1977, the Supreme Court decided Abood v. Detroit Board of Education. In this case, the public union was “flexing muscles and asking for recognition,” according to Professor Epstein. He expressed that if you compel people to join an economic union that is dealing with political expression, you cannot compel people to fund those organizations. In this case, the doctrine of unconstitutional conditions applies, meaning that people cannot be given certain either/or choices. For example, public teachers cannot be told that they will be fired for speaking out. They can be told what they can or cannot say in a classroom, but can’t be prevented from engaging in ordinary speech activity. Professor Epstein noted that in Abood, the Supreme Court decided to split the baby. Insofar as the union was trying to engage in a bargaining function by trying to provide union members with benefits, a person could not be a free rider on those benefits and so would be forced to contribute. The free rider problem was thus solved.

From 1977 to 2011, there was no question that the Court’s attitude was that prior decisions were a stable compromise. From 2011 on, the Supreme Court got complicated cases with disagreements on how to work these cases, and whether the definitions of employees were sensible enough to merit First Amendment protection. In the cases that followed, there was speculation about whether the Court would change the Abood rule, and ultimately the Chief Justice tipped the decision: Abood was gone. “Now we have a situation where there will be a real dent in compulsory unionism in the public sector,” stated Professor Epstein.

The question becomes one of stare decisis: do we let the decision stand, or return to other principles? It becomes tricky to weigh the values. One of the first values to be weighed is reliance. Professor Epstein pointed out that the decision in Plessy v. Ferguson to uphold segregated schools and trains was undone by Brown v. Board of Education in one day. The reliance interest there was not very deep. However, the Abood case is different than Plessy v. Ferguson, and so the balance was going to be closer.

Another factor is the First Amendment. Constitutional law is organized more about standards of scrutiny review than anything else. “If anything is subject to the rational basis test, it’s constitutional,” Professor Epstein said. Labor speech is not political speech. Labor speech is about union elections. One of the types of speech that we worry about is compelled speech. But in regard to the union, that is not as big of a problem. We are compelling people to speak, but on the other hand, we owe them a duty of fair representation. And at this point, union and race start to intersect again.

Steele v. Louisville & Nashville Railroad Company examined how the union has to treat its black members. In black and white unions, the management team played unions against each other, but in the end, wage structures were about the same.

In the 1930s, the union had a white majority. It entered into a contract with all the major railroads saying that all black workers had to be in lesser positions. However, the decision didn’t work, and the litigation was continuing even 12 years later. Professor Epstein said that when trying to apply the duty of fair representation to other cases, it’s hard to know how to divide it.

When it comes to the problem of teachers’ salaries, then, how should it be decided? Should the decision be based on subject, class size, break times, or something else? There can be genuine conflicts, and the duty of fair representation turns out to be essentially hopeless. Professor Epstein, using Obergefell as an example, pointed out that conflicts of interest are acute. Another element in the case is what will happen once the situation is broken down.