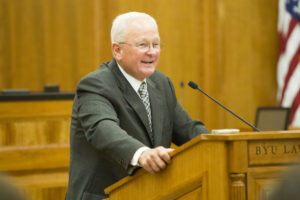 Monte N. Stewart ‘76 did not plan on going to BYU Law School because when he was an undergraduate going to school, BYU Law did not yet exist. When the first dean of the planned-for law school, Rex Lee, was putting together the faculty and students for the first class, he had the obligation to get great students to come to what would be an unaccredited law school. The implication of being unaccredited is that graduating law students cannot take the bar until the school becomes accredited. For Stewart, coming to BYU Law was not a safe choice. “It would be hard to overstate the risk that he was taking,” said Dean Rasband who emphasized that we love that which we sacrifice for.

Graduating from BYU Law was the foundational first step for the many successful legal careers of the charter class that followed. Stewart clerked for Chief Justice Warren E. Burger on the Supreme Court, received a Master of Studies from Oxford University, and worked for several firms before starting his own. He was the U.S. Attorney for the District of Nevada before serving as a mission president for the Church of Jesus Christ of Latter-day Saints in Atlanta. He was the president of the Marriage Law Foundation in Provo from 2004 to 2008.

Stewart is BYU Law’s 2015 Alumni Achievement Award recipient. One of the main reasons Stewart came to this school was because he saw something in its mission that he wanted to be a part of. “He has a sense of our history and our aspirations,” said Dean Rasband. “He has lived that mission.”

Since graduating 39 years ago, Stewart reported that he has been in close orbit around the law school. “It has always been in my thoughts and close to my heart,” he said. He quoted Elder Dallin H. Oaks throughout his lecture, recounting him as one of the most important actors in the law school’s founding. Stewart emphasized one line in particular from Elder Oaks’ 1973 opening remarks to those first students: “The special mission of this law school and its graduates will unfold in time.”

Using six principles, Stewart urged those in attendance to seriously consider and think deeply about the special mission of the law school and its graduates. First, the Lord caused the creation of the law school. Stewart told of many miracles relating to the founding, many of which occurred in private but had dynamic public effects. He attributed many of the recruitment miracles to Rex Lee’s audacity as an advocate. In addition, he recounted the high quality of BYU Law Review and the speed with which the top law firms embraced the graduates of this law school.

Second, Stewart emphasized that the Lord has always had serious purposes for this law school. “The notion of a purposeless God is nonsensical to me,” he said.

Third, those serious purposes of the law school will unfold in time. The first day of law school here was Monday, August 27, 1973, and four decades later, Stewart said, we are beginning to see and define that special mission. Future events will show what it is.

Fourth, that special mission encompasses both the law school and its graduates. Elder Oaks suggested a single and shared mission between the school and its students, hinging on the concept of stewardship. Those motivated by the desire only to find the highest ranking at the lowest tuition run the risk of living life blind to opportunities, realities, and values of far greater worth, said Stewart.

Fifth, the law school will fail to fulfill its mission if its stewards, most important the students, do not strive to understand and achieve that mission. “There was a strong sense that whatever the law school’s mission might be, the quality of excellence was necessary to fulfill that mission,” said Stewart. BYU Law paid close attention to and modeled itself after the University of Chicago and the University of Michigan to become one of the best. Stewart stressed that it is not “just another law school.”

Sixth and finally, the unfolding of the most important and serious purposes comprising that special mission are yet ahead and the stewardship of the students is crucial to that unfolding. Stewart posed a question to those in attendance: “By and through whom could that happen, if not by and through you?” He stated that each student’s stewardship is highly individualized. “Only you can find and fulfill it,” he said.

Stewart suggested that each charter class student came to BYU with a high tolerance for taking risks, and he commended that quality to the current students. Although each student’s contributions following law school will be individualized and unique, Stewart also taught that there is value in class bonds. “I suggest that while you are here, you value and form deep friendships with classmates and their spouses and nurture those friendships in the years to come,” he said.