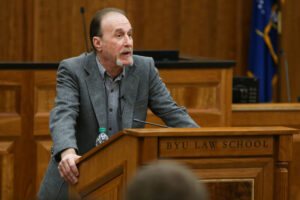 The BYU Law chapter of the American Constitution Society hosted Ray Krone, a speaker for the Innocence Project, on November 18, 2016. Krone shared the story of his wrongful imprisonment and conviction, urging students to stand for what they know to be right.

Krone’s conviction story began in 1991 when the body of a 36-year-old woman was found in an Arizona bar where she worked and where Krone was a regular customer. As police interviewed co-workers, one of them mentioned Krone as the victim’s boyfriend, though Krone barely knew the woman.

Detectives showed up at Krone’s home and asked him to answer a few questions even though he was unaware of what had happened. “The first thing I said was, ‘Sure, come inside.’” However, the detectives insisted that Krone come to the police department for a thorough interrogation. “I just cooperated,” he said. After a three-hour interrogation, Krone thought it was over.

The next day, a detective arrived again and told Krone he had a few more questions. “This time, when I got inside the interrogation room they had a search warrant,” Krone explained. They took blood samples, hair samples, saliva samples, and Styrofoam bite impressions in an attempt to find evidence that would link Krone to the case. Krone recalls the accusatory words of the detective: “The detective said, ‘It’s time to come clean and tell the truth. I know you did it.’” But Krone was not about to confess to something he had not done. “My honor and my integrity was something I was always proud of,” he said.

Krone left the police office “truly mad” that he was being accused of the murder. Little did he know that the following day he would be arrested for kidnapping, sexual assault, and murder.

Krone recalls thinking that there was no way he would stay in jail for long. “I actually believed that they were out there conducting the investigation and that I’d be out in a minute. I was able to talk to my family and tell them where I was and that this was a horrible mistake,” he said.

However, Krone soon found that he was not about to be released, and the cost of an attorney for defense would start with a $20,000 retainer. “I was supposed to pay to be defended for something that I didn’t do,” he said.

Through subsequent legal proceedings, Krone always maintained his innocence, but the prosecution brought in a dental expert who claimed that Krone’s mouth matched the bite marks found on the victim. Compelling evidence that Krone did not commit the crime was dismissed.

During his time in prison, Krone says the stories of Job and Jonah inspired him to keep advocating for himself. “I found strength, I picked myself up, and I realized if I wanted to fight this system, I better know this system,” he said He began to go to the jail’s law library, and he became what he calls a “legal help” to the other inmates. He was able to petition for a re-trail after sitting on death row for four years.
At the retrial, DNA evidence was presented that indicated Krone’s DNA did not match the DNA of the saliva found on the bitemark. “Imagine how good it felt when they came out knowing that there was no saliva on that bite mark [from me],” he said. There was additional evidence that didn’t match Krone with the crime: Krone’s feet were much larger than the footprints of the perpetrator, and the fingerprints did not match. The prosecution argued that the DNA evidence should be dismissed and that the supposed bite mark evidence proved Krone’s guilt. After being out for three and a half days, the jury came back with a guilty accusation.

Krone was devastated. He took courage from those who believed in him. “Meanwhile my friends and family still stood by me; they still believed in me,” he said. The judge was also unconvinced that Krone had committed the crime, so he took him off death row. However, Krone, a man in his 30s, still faced a minimum of 46 years in prison. “It was a death sentence. I [knew I] might not be executed… but I wasn’t going to live that long in there,” he said.

Additional DNA testing was completed in 2002. The state databank of DNA came back with a startling result: not only did the DNA samples not match Krone, but a match was found with a man who lived near the crime scene. That man was also in prison, serving time for sexual assault committed just three weeks after the murder.

Shortly after the discovery of new information, Krone was released from prison and charges were dismissed. “I walked out to start my life all over again at age 45,” he said. Krone was the 100th person to be exonerated from death row in Arizona.

As he left jail, one question from the media caused him deep reflection. He was asked how he justified God leaving him in prison for ten years. “I was stunned, frozen,” he said. But Krone came to a profound conclusion. “Maybe it’s not about those 10 years spent in prison. Maybe it’s about the next 10 years,” he said. Since that time, Krone has vigorously advocated for reform and has set out to share his story with others to inspire reform and justice.

As he concluded, Krone reminded law students to do what they believe is right. “You have your morals, your beliefs, and the things that you stand for,” he said. “You have what you know is right and wrong, what you believe in deeply. When you go out in the profession, you pursue that. You stand for the values… You change the system; don’t let the system change you.”

Bryson King, President of the BYU Law ACS, said he gleaned new insights from Krone’s message. “I found a theme in [his] message today: to survive you must fight,” he said.

“There are so many defendants in the criminal justice system who, for some reason or another, have given up the fight for their rights. For some, it’s the result of poor representation. For others, it’s the lack of moral support systems. Each defendant has a right to fair, impartial, and professional representation, but to maintain that right, each defendant should be prepared to fight for it…. If they can do that, they stand a far better chance of surviving the justice system and safeguarding their diminishing rights.”

King also feels that Krone’s message can inspire everyone, regardless of their area of practice. “We want law students to realize how problematic and frequent wrongful convictions are in this nation, and we hope that by hearing the consequences of wrongful convictions first-hand, students will be inspired to make a difference,” he said.  “In the future, we hope students will research legislation on these issues, follow the legal trends in courts and congresses, and promote policies that encourage the presumption of innocence, check the expanding power of prosecutorial discretion, and safeguard each defendant’s constitutional rights.”