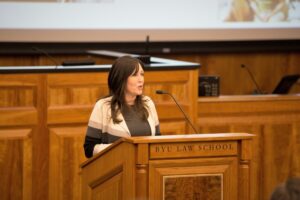 The ACS Innocence Project hosted guest speakers Katie Monroe and Penny Beernsten who spoke on the collateral damages of wrongful convictions. Beerntsen is a crime survivor from a case that resulted in a wrongful conviction, and Monroe is the daughter of an exoneree.

Katie Monroe’s mother was wrongfully convicted of a crime she did not commit. Monroe spearheaded an 11-year legal battle to free her mother, which she won. She shared that DNA testing has exonerated 349 innocent people since 1989. “The innocent suffer tremendous loss and injury,” she said. “They face innumerable obstacles as they try to rebuild their lives after years locked in prison, but these are not the only collateral damages from wrongful convictions. Families also suffer.”

Monroe’s mother was convicted of murdering her long-time boyfriend; in actuality, it was a suicide death. The evidence and her mother’s alibi showed that her mother was innocent, but that evidence was not revealed at the time of the death. Her mother received a 22-year sentence. It took Monroe 11 years working full time on her mother’s case to free her from prison.

During the time her mother was in prison, the family maintained hope that she would one day be released. “We lived with the reality that she might die in prison,” she said. “But, we had to maintain hope.” The worst part for Monroe was knowing that her mother was suffering in prison with poor health care, a lack of nutritious food, and restricted communication with her family. Monroe loyally visited her mother every week. “It’s a terrible thing to go into a prison and not be able to touch your loved one, or hold them, or hug them,” she said.

Monroe’s family also suffered consequences from their mother’s wrongful imprisonment. They put their lives on hold, took on enormous economic debt, were persecuted by others, and had a loss of faith in people. “We missed all of those happy and ‘normal’ moments that families have together,” she said.

From this experience, Monroe learned that this type of trauma is multilayered and necessitates a long healing process. “There is a depth and a level to this kind of trauma that I think we don’t fully understand or appreciate yet,” she said. Monroe summarized that in order to deal with the issue of wrongful conviction, conversations must take place with victims, victims’ families, law enforcement, and others, to bring about reform.

Following Monroe, Beerntsen shared the life-changing incident that lead her to advocate for the aid of exonerees. She was jogging on a Lake Michigan beach in Wisconsin in July 1985, when she was sexually assaulted and almost murdered. As a result of a flawed identification process, she selected Steven Avery’s photo from a line-up. He was convicted and sentenced to 32 years in prison.

After the incident, Beerntsen was very depressed and angry, until she realized it was harming her relationships with family and friends. She began to seek healing from the trauma she experienced by speaking in prisons and joining the restorative justice movement. “What I didn’t realize was how mutual that process would be, how much I would learn from the men and women I spoke to,” she said.

Eighteen years later, Avery was exonerated by DNA evidence and released, causing Beerntsen’s wounds to reopen. During the exoneration process, a process that took 2.5 years, she felt there was nothing she could do. “I felt helpless, I felt hopeless, and I felt utterly alone,” she said.

Later, Beerntsen was devastated to learn that Avery was innocent and that the actual perpetrator, Gregory Allen, committed additional sexual assaults and remained free until 1995. “The guilt was absolutely smothering,” she said. Beerntsen reflected that blame was put on her from others, despite her being the victim in the case. “Victims often become the sacrificial lamb,” she said. Fortunately, she was able to have a face-to-face conversation with Steven Avery, who told her that he did not blame her for what happened.

In order to heal, Beerntsen had to come to terms with her mistake. “I had finally come to terms that making a horrible mistake does not make me a horrible person,” she said. She has continued to work with inmates through the Healing Justice program. The program provides support, reconciliation, and recovery to the exonerated, original-crime victims, families, and others affected by wrongful convictions. “We are all wounded, but we are becoming wounded healers,” she said.