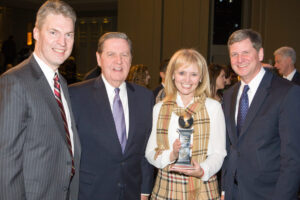 The J. Reuben Clark Law Society held its annual fireside on Friday, January 24, 2015, at the LDS Conference Center in Salt Lake City, Utah. Dr. Katrina Lantos Swett, Chair of the United States Commission on International Religious Freedom and President and CEO of the Lantos Foundation for Human Rights & Justice, addressed those in attendance.

Swett began her remarks by recounting past violations of religious freedom. “History is not kind to those who tread on the religious liberties of others,” she said. “When anyone’s religious freedom is violated, other human rights invariably are abused as well. That’s because in the end, human rights are indivisible.”

Swett stated that religious freedom is the “birthright of humanity,” and includes the freedom to believe whatever one wants—even if not a religious belief—and the right to peacefully practice that belief.

Swett stressed two points: “First, when religious freedom and other human rights are violated, real people suffer. Whether their names are etched on gravestones or their faces stare at us from behind prison bars, we must never forget them. And second, the right of religious freedom is far broader, far more inclusive, and far more sweeping in scope than most people realize.”

Swett likened the lack of religious freedom in some countries to a mathematical equation. “If you get something wrong, if you make a mistake early in the equation, it does not matter how long and how hard you work on the rest of it; the sum will never come out right,” she said. “Unless you go back and fix your error, you cannot get the conclusion you seek.”