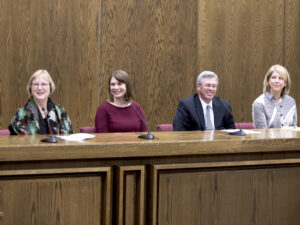 Finding a Dream Job
Justice Durham advised law students to do the best they can where they are. Similarly, Judge Petersen said, “Something that you are good at, and that you enjoy, will be your best work.” Though there will be hard things in all jobs, she challenged students to commit themselves and to work hard as they figure out their own path to their dream jobs. Hafen also advised students to “do whatever you do, and do it well.”

As students are figuring out what they want to do after school, Judge Brown encouraged them to take advantage of opportunities and to expose themselves to a variety things in law school even if they do not seem interesting at the moment. Judge Gardner also advised students to give the opportunities time. “Whatever career path you take is initially going to be hard,” he said. “Give it enough time to see if it is something you will be good at.” Judge Connors urged students to recognize and cultivate relationships along the way to a dream job. He noted the wisdom in treating every interview and encounter with lawyers in the community as a chance to establish their reputation in the legal market.

Getting Along with Opposing Counsel
Judge Connors said the first thing is to be “yourself.” “Life is too short to be a jerk,” he said, also noting the importance of treating assistants and staff well. “You’ve got to be a real person, an authentic person…. You certainly don’t need to treat people badly to be a good litigator.” Judge Brown echoed Judge Connors’ advice, and added that in a small legal community like Salt Lake City, there is a benefit of being friendly with those whom your clients may see as the “enemy.” Hafen also commented that clients who want “mean” lawyers have slower cases because not getting along slows down the entire process.

Judge Petersen said, “Being kind as a lawyer is not a weakness. I see it as a strength.” She advised students to keep their own standards of kindness and integrity while still being assertive. Judge Durham advised: “There are skills that you can learn that will help you design your own narrative and respond in a dignified way to outrageous behavior from the other side. You never serve your client’s interests by engaging in it yourselves.”

Persuading a Judge
Judge Scott said, “You really should be yourself.” As a judge, she enjoys interacting with individuals as well as advocates. Also, judges rely on lawyers to be straightforward and accurate. “Credibility is so important,” she said. “I can’t emphasize that enough.”

In addition, Judge Gardner said, “You want to make sure you’re prepared.” He noted the wisdom in over preparing and echoed Judge Scott in stressing that a lawyer’s credibility is the most important thing he or she has before the court.

Being a Great Lawyer
Judge Brown told students, “Find what you love to do, and because you love it, you will do your best. Justice Durham simply told students to work hard and be kind. Judge Petersen commented that law students are very lucky to be entering a profession where there are so many associations. “To have an interesting life, enjoy these people,” she said. Judge Connors emphasized that there is nothing more important than being prepared, and even over prepared. Judge Scott encouraged students to take a long-term view in how they commit to practice. Although the first couple of years are hard, she said it is worthwhile. Judge Gardner advised students to find balance in their lives, and to define themselves as more than just lawyers.