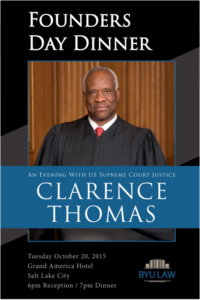 The Honorable Clarence Thomas, Associate Justice on the United States Supreme Court, will speak at BYU Law’s annual Founders Day Dinner.  The dinner, which is a ticketed event, will take place on Tuesday, October 20 at 7:00 p.m. at the Grand America Hotel.

Prior to the Founders Day Dinner, Justice Thomas will spend time at the law school as a distinguished jurist-in-residence.  He will meet with faculty, teach a class, and host a question and answer session with the law school student body.

“We are thrilled that Justice Thomas accepted our invitation to visit the law school and serve as our fall semester Distinguished Jurist-in-Residence.” Dean Rasband said. “A visit from a sitting Justice of the United States Supreme Court is a rare treat for law students, who spend their days studying the work of that Court. It is a particular honor to host Justice Thomas because he has been such a friend to the law school over the years. He has visited us before, spoken at events of the J. Reuben Clark Law Society, and hired a couple of our students to serve as his law clerk. It will be a unique and wonderful opportunity for our students, as well as our faculty and alumni, to spend time with Justice Thomas.”

Justice Thomas is an Associate Justice of the Supreme Court of the United States.  Justice Thomas grew up in Savannah, Georgia, and was educated at the college of the Holy Cross and at Yale Law School. In 1974, he was appointed an Assistant Attorney General in Missouri and subsequently practiced law there in the private sector. In 1979, he became a legislative assistant to Senator John Danforth and in 1981 was appointed Assistant Secretary for Civil Rights at the U.S. Department of Education.  In 1982, President Ronald Reagan appointed Justice Thomas as Chairman of the Equal Employment Opportunity Commission. Justice Thomas was confirmed by the Senate as a member of the United States Supreme Court on October 15, 1991.