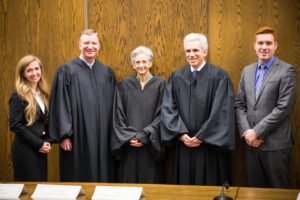 Stuart and Sullivan both prepared extensively for the final competition. “I was most nervous about trying to fill the shoes of the competitors that went last year,” Stuart said. “I remember watching last year’s 2Ls compete and thinking how impressive they were.”

Both finalists learned valuable lessons from their Moot Court experience. “I learned that I can trust myself on the spot,” Sullivan said. “I was worried that I wouldn’t be able to answer spontaneous questions well, but as I trusted the preparation I put in, everything worked out just fine.” Stuart learned the principle of being a “reasonable attorney.” “There really is no need to stand up and argue a point that is not critical to your case,” he said. “In line with that, taking a stand that goes farther than you need to win can be damaging. Concessions, when appropriate, actually help you focus your argument to the critical points that need to be discussed in the limited time period you have.”

Both Stuart and Sullivan are eager to implement the judges’ advice and improve their skills as future lawyers.