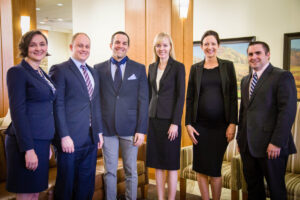 BYU Law sent two teams to compete in the Las Vegas regionals for the ABA National Moot Court Competition.  Each team was comprised of three students: two students to argue the case and one to write the brief. Both teams represented BYU Law well receiving high individual scores. Out of thirty-two teams, BYU Law students Leah Aston, James Grossman, and Alex Westover finished in the semi-final round.  Students Brittany Frandsen, Alex Biggs, and Lloyd Wilson advanced to the final round of the regional competition.

“The best part of the competition was working with our team,” Grossman said. “Those competing and representing BYU Law are truly the cream of the crop, and it has been an honor working with them.”

This year’s fictional problem involved criminal law.  A white police officer shot an unarmed black teenager during a traffic stop and then concealed the body camera footage of the shooting in his police locker.  BYU Law students acted as advocates in a hypothetical appeal to the U.S. Supreme Court.  Students discussed whether a warrantless search of the police locker violated the Fourth Amendment. They also discussed whether a federal hate-crime statute should apply to police officers.

Each oralist had to understand both sides of the issue so that he or she could argue for petitioner or respondent on short notice. “It was a life changing experience,” Grossman said. “Preparing and executing appellate level arguments helped me develop the confidence to be successful in the real world.”

The teams, composed solely of third-year law students, qualified for the national team by finishing as the top orators and brief writers in the Rex E. Lee Moot Court Competition during their second year. The teams then spent the next year and a half preparing for the national competition. “The hardest part of moot court is the preparation. Between the 100 plus hours to prepare the brief and the several additional hours of oral argument preparation, a lot had to go into our 15 minute presentation,” Grossman explained.

The students are grateful for the experience and want to thank those who supported them in this prestigious competition.