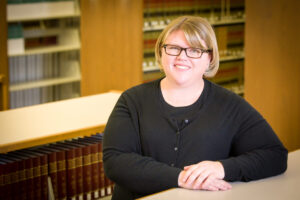 After earning her undergraduate degree in English at BYU, Murphy worked as a high school English teacher for eight years in the Salt Lake Valley. She then went on to graduate from the University of Utah’s S.J. Quinney Law School. She served as a law librarian at the University of Utah before moving to BYU Law.

Murphy said she had an amazing experience studying at BYU as an undergraduate. “I jumped at the chance to come back,” she said.

The oldest of four, Murphy enjoys spending time with her family. She also loves to travel and to play tennis.

“Last spring I spent a glorious month in Paris, France,” Murphy said. “I grew up in San Clemente, a little beach town in Southern California, and I played a lot of tennis. As a child I made a goal to go to all four tennis grand slams. I have been to Wimbledon and the French Open, and in two years I will be going to the Australian Open. The U.S. Open will be the only one left.”