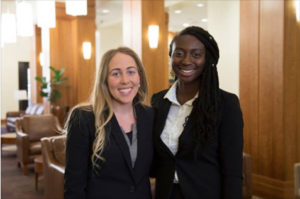 The tournament brought together student competitors, scholars, and practitioners in the field of religious freedom from around the country. The case topic was the Establishment Clause of the First Amendment. Approximately 20 oralists participated in the event.

In preparation for the competition, Caruso and Sarr wrote a 25-page brief. In addition, they held oral argument practices with BYU Law bench team members Peter Hecker, Hannah Roberts, and Matt Jaynes, who prepared them for questions they could be asked.

Caruso described the competition as an excellent experience. “ I have always cared deeply about religious freedom, so the opportunity to apply my oral advocacy skills to an issue that I feel so strongly about was an incredible experience,” she said.

Sarr also enjoyed the competition. “It was a good experience to argue against other schools and to see the different ‘mooting’ styles,” she said. “Arguing real issues in front of practitioners somehow brought together the things we learn in law school. Ultimately, if you are going to be a litigator, the format of the moot court competition is exactly what you see happen in appellate courts. My experience on the traveling team helps me feel more prepared and a little less intimidated by the idea of having to represent future clients in a similar setting.”

Madelyn Blanchard, Moot Court Vice President, said the students represented BYU Law very well. “We are very proud of the success Caruso and Sarr had at this competition,” Blanchard said.