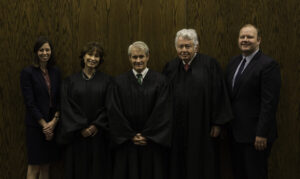 Every year BYU Law holds the Rex E. Lee Memorial Moot Court Competition in honor of the school’s founding dean. This year’s finalists had the privilege of arguing in front of a panel of judges from the D.C. Circuit: Judges Thomas B. Griffith, Patricia A. Millett, and David B. Sentelle.

After hearing oral arguments from the four participants, the three judges named Brooke Ellis as best oralist and Matthew Jaynes as runner-up. In regard to the briefs, which were submitted before the oral arguments, the award for best brief was given to Peter Hecker, and Robert Ahlander received honorable mention.

“It would be the highlight of many lawyers’ careers to argue before a panel of judges from the  D. C. Circuit,” said Kirsten Gerdy, “These four students not only had this rare opportunity, but as oralists they  received direct feedback from each of the judges.”

Judge Millet praised the students’ preparation. She stated that usually she has to explain to students that oral arguments in front of the D.C. Circuit are a dialogue, but that these participants already understood. Her advice to the participants was to think about their audience: the judges. The judges have the votes, and they will write an opinion. “Your arguments should be charting a path to your opinion,” she said. “If it doesn’t feel right to you, then keep preparing.”

Judge Sentelle complimented all the participants and noted that they did a good job of responding to the questions the Court asked. He advised the participants to know what the issues are, and then be willing to fall back, if necessary, to the core principle. “Know what is necessary to win the case and rely on that,” he said.

Judge Griffith counseling counseled the participants to listen to every word that Judge Millett and Sentelle had said. Next, he gave advice on brief writing. “[That is] the real work in winning a case in front of the Supreme Court,” he said. He spends most of his time reading the briefs—for him, that’s where the preliminary decision, and sometimes the final decision, is made. He also counseled the participants to take their time writing the brief. “Very few good things happen in a rush,” he stated.

Judge Griffith also talked about wrestling with an idea and not being able to let it go until he has thought it through completely. In order to write clearly, he said, it helps to read a lot. The two roles in writing are to inform and to persuade. He offered Rex Lee as an example of a lawyer who could take complex ideas and make them understandable. That is one of the great skills of an oral advocate, he said.