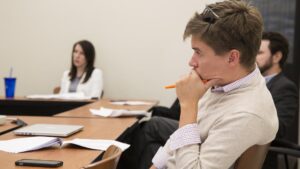 In the fall of 2009, BYU Law Professor Gordon Smith and Justice Tom Lee, who was then an Associate Dean, implemented an idea to assemble junior scholars from the Rocky Mountain region. There were a lot of new professors starting at BYU Law at that point. “Our thought was that we could help them build out their professional networks by introducing them to other junior professors in the neighborhood,” Professor Smith said.

Justice Lee sent out an email announcing the event to faculty members. “The idea for this forum…is to bring untenured faculty in our region together to present and comment on their scholarly works in progress and to participate in a plenary session on advancement toward tenure,” he wrote.

For the first Forum, there were 27 participants from 11 different law schools who were invited to BYU Law as a place to discuss ideas. “[At BYU Law], we value that intellectual conversation, and I think it had that effect,” Professor Smith said. The Forum was so successful that other schools asked if they could help host; BYU Law decided to share it with the University of Utah Law School, alternating every other year. It has also expanded to include Washington and Oregon law schools.

Another one of the original intentions was to have panels of senior professors who would talk about various topics each year. They would participate to coach and instruct as well as to help build community among the junior scholars. Professor Smith emphasized that it was intended to be a time for people to cultivate their networks and meet people who could be resources for questions in the future. “A lot of friendships grew out of that,” he said.

Professor RonNell Andersen Jones coordinated this year’s Forum that was held at BYU Law September 24-25, 2015. All of the people who attended are affiliated with accredited law schools in the Rocky Mountain region: from the Pacific North West down through Arizona. The format included a plenary session designed to speak broadly to people who are new at teaching law and new at legal scholarship and then small workshop sessions where the attendees circulated a draft of their work in progress. It provided a safe space within which they could discuss concerns about their work and avenues that they are considering exploring.

Professor Jones participated in the Forum herself for several years, and stated that it was always very helpful. There are some people to whom she still sends research that she met during her first years of attending. She described the Forum as a mechanism for passing down wisdom and tricks of the trade to law professors who are just starting out. Ultimately, it provides a great opportunity to interact and will be both immediately instructive and also a helpful tool in many ways in the future.