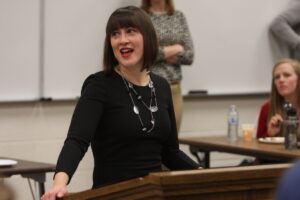 BYU Law student chapters of Women in the Law and American Constitution Society hosted a panel entitled, “Steps Toward Women’s Equality.” BYU Law Professor and panelist Kif Augustine-Adams was joined by colleagues from the main campus: Professor Jessica Preece from the political science department and Professor Jini Roby from the social work department. Each offered insight into the problems of gender discrimination and the advancement of women in society.

Professor Preece spoke on the importance of networks in the workplace. “Common observation, as well as academic research, find that social networks tend to be gendered,” Professor Preece said. She noted that people are drawn to others like them, which scientists refer to as “homophily.” Simply having friends of the same gender does not automatically equal gender discrimination, but when men (who statistically run more offices than women) do this, women are by default at a disadvantage. 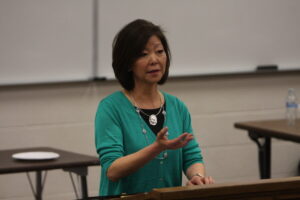 Professor Roby briefly discussed a number of gender issues: HIV and AIDS, and the negative stigma women often face regarding its contraction and spreading, as well as the relative ease with which women are able to contract the disease. “Women are more vulnerable to HIV and AIDS,” Professor Roby said, “because, culturally
speaking, they don’t have the power of decision-making in their sexual relationships, and their physiology actually makes them more vulnerable to the virus.”

Professor Roby also discussed marriage laws prevalent in locations where traditional laws are clashing with modern laws. As examples, she mentioned countries that allow men to marry multiple wives and areas where girls are getting married at a very young age. “Early marriage is also an issue which puts girls at a great disadvantage in terms of education. It jeopardizes their health.” Roby said. “Marriage laws and marriage traditions are often at odds with women’s and girls’ well-being.” 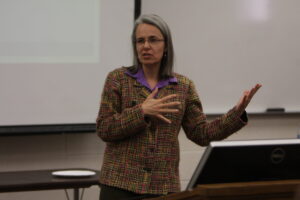 Professor Augustine-Adams was the final speaker, addressing general terms and concerns such as what equality means and looks like. She recognized formal equality and substantive equality as well as different ways in which individuals can assist in taking steps toward women’s equality. She noted, “Although we approach some features of law as neutral[,] they really aren’t. Everything has a particular perspective. A way something has come to be reflects the perspectives of those involved in the decision-making.”