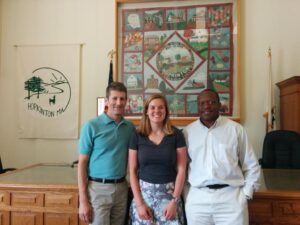 One of Rebekah-Anne Gebler’s career goals is to work with communities on land use or zoning issues. This summer she was able to work with the town manager’s office in Hopkinton, Massachusetts. Gebler helped refine the town’s license policy manual by updating current policies; she was also able to update the zoning bylaws based on the corrections from town meetings.

Primarily, Gebler had the responsibility to ascertain whether the documents required changes and to present suggestions. “This kind of deeper thinking was always present in class at school, so I feel more prepared for what I am doing because of the previous eight months at BYU Law,” she said.

From this experience, Gebler gained the insight that working in small town government requires being both personable and efficient. According to Gebler, the people who have worked at town hall for many years have a traditional system of operations that is difficult to change. Although there are also some who only began working there within the last couple of years, Gebler remarked that trying to require them to do their job in a certain way simply didn’t work. “That’s where the personable nature is required,” she said.

Because Massachusetts is a Home Rule State, each town or city has inherent governmental authority to create bylaws without the permission of the state so long as they don’t conflict with the state laws. In Gebler’s work experience at Hopkinton, amendments were proposed at an annual town meeting. She found the experience of witnessing a modern town exercise on an older government system to be fascinating.

One of the biggest highlights of Gebler’s work was her participation in the town manager’s office during two major controversies. The first involved a developer’s purchase of private land to construct a CVS® on Main Street. The second was the expansion of the town’s public library. Gebler commented that while these might seem like small issues, because the town only has about 14,000 people, controversies like these bring out passionate emotions. Through this experience Gebler has gained the insight that towns have a business side but also a personable side. In terms of a future career, “figuring out from a legal standpoint how to appease both would be so much fun,” she concluded.