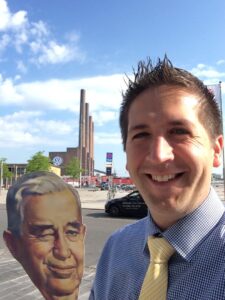 Test driving some of the newest electric vehicles that aren’t available in the United States is part of BYU Law student Jonathan Bludorn’s summer externship. Bludorn is spending his summer in Germany working with Volkswagen in-house counsel.

Externing for Volkswagen has allowed Bludorn to see a sophisticated legal team in action. Because he is located in Germany, all of the communication with the United States goes through New York. As a result, he has been able to gain perspective as to how New York firms operate. Perhaps more importantly, this externship has given Bludorn an edge in his legal education and ultimately his job search.

“The practical application of the law and the mentors at my disposal have made this summer a defining point in my career,” he said. “I have been privy to strategy conversations with partners at top law firms and have had access to professional work product.”

One of the core classes for a first year law student at BYU is legal research and writing. Through two semesters, students learn how to research and how to write according to legal standards instead of traditional academic practices. Bludorn reports that these research and writing skills have been the most relevant to his work at Volkswagen. In addition, he states that some of his classes have “become suddenly very real” as he has gotten to see them in application.

Ultimately, this externship at Volkswagen has shown Bludron the importance of good training, and the value of quality work. Through this opportunity he has even had “the chance to be involved at a more strategic level, something most associates only long for.”