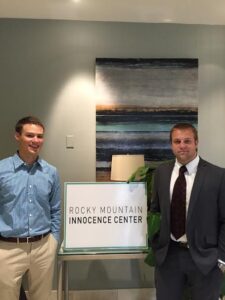 Last year the BYU Law School began an annual fellowship for recent graduates interested in work aimed at correcting and preventing the wrongful conviction of innocent people in the justice system. The fellowship was named in honor of Nelson Galbraith, a man who was falsely accused of murdering his wife after she committed suicide. Facing the terrifying prospect of being wrongfully convicted in an already trying situation changed Galbraith’s family forever. As part of their work to spare others from similar experiences, they donated generously to make the fellowship possible.

James Egan, BYU Law’s first Nelson Galbraith Fellow, recently finished his yearlong fellowship at the Rocky Mountain Innocence Center (RMIC), a regional innocence project that works to prevent and correct wrongful convictions in Wyoming, Utah, and Nevada. RMIC provides free legal services to individuals with tenable claims of innocence and advocates for criminal justice reforms relating to wrongful convictions. Egan learned about RMIC midway through his second year of law school when the organization sponsored an event featuring Darryl Burton who spoke to a packed room about serving 24 years for a murder he didn’t commit. Egan was instantly intrigued.

Egan’s interest in the innocence movement grew with subsequent experiences as a law student. Along with a few law school classmates, he attended a showing of West of Memphis, a documentary recounting the story of the wrongful conviction of the “West Memphis Three” in Arkansas, at the 2012 Sundance Film Festival. With the help of a faculty member, he began work as a clerk with the Criminal Appeals Division of Utah’s Attorney General’s Office just as the Utah Supreme Court handed down its decision in Brown v. State, Utah’s most significant case of wrongful conviction to date. And with the help of BYU’s first course on wrongful convictions, Egan learned about the causes of wrongful convictions and the complex world of post-conviction litigation.

Describing his experience with RMIC, Egan said, “There’s rarely a dull moment. The work is sobering, exciting, and challenging—and there’s a lot of it. I wish more BYU students knew about the clinic and fellowship. RMIC could definitely use their help, and they could have a transformative experience.”