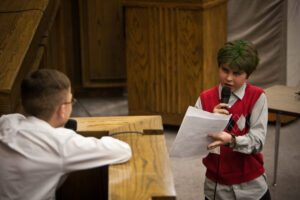 A line of fifth-grade students from Wasatch Elementary School in Provo weave their way into the court room.  A ten-year-old judge wearing a shirt and tie takes his place on the stand next to the bailiff. A few students sneak over to say hi to their BYU Law student mentors and then take a seat at the front of the chambers.  When the bailiff calls the court in session, the student jury, prosecutors, defendants, witnesses, sketch artist, recorders, and observers are quiet.

Each March, the fifth-grade students at Wasatch Elementary get to participate in a mock trial as part of BYU Law School’s student-run elementary school mentoring program. This is a chance for them to experience what the judicial branch is all about.

“The fifth-grade students did a great job,” said BYU Law student Elizabeth MacLachlan who is currently serving as the program’s co-president. She was impressed with how well they wrote their own lines, memorized, and asked questions about what it means to serve as a jury member.

“The more opportunities they have to be exposed to different ideas and experiences, the more their curiosity is piqued generating additional questions and greater learning,” she said.

BYU Law’s fifth-grade mentoring program was started almost 20 years ago by BYU Law Professor Brett Scharffs who wanted to instill a love of learning, a sense of community, and to help young students feel invested in by an adult.

Cora Barrett, the program liaison from Provo School District, recalls the effect the mentoring program had on two fifth graders in particular. “I had a young girl who struggled academically that came to the Law School to be mentored. Then, several years later, she came back as a law student and mentored another student,” she said. “Another year, I paired an African American girl with a female African American mentor. After the program ended, the fifth grader mentioned to me that she felt empowered that she could do anything after seeing her mentor going to law school.”

While the fifth-grade students enjoy the activities and projects they do in the mentoring program, MacLachlan thinks it is the relationships they build with their mentors that have a lasting impact. “The fifth graders look forward to seeing their mentor each week and it means a lot that they have a friend they can look up to at the Law School,” she said. “It is also a great opportunity for law students to serve the community.”