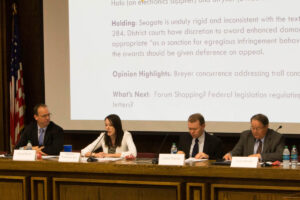 BYU Law’s annual Supreme Court Review was held on September 16, 2016. Students and professionals had the opportunity to hear legal scholars discuss some of the U.S. Supreme Court’s decisions from the previous term.

Lori Ringhand, Associate Dean for Academic Affairs at the University of Georgia School of Law gave the keynote address, “A Confirmation Crisis?” Professor Ringhand examined whether there is a current and potential crisis brewing with upcoming U.S. Supreme Court nominations with the accompanying Senate hearings.

What may be considered a crisis, according to Dean Ringhand, is the lack of a Senate hearing. “If there is a crisis with the Merrick Garland nomination, it lies in the fact that we are not able to have this constitutional moment, this moment where we come together: we debate, we discuss, we talk about what we want and think and believe about our Constitution,” she said.

While calling Senate hearings inevitably “ugly,” Dean Ringhand pointed out that the hearings play two important roles. The first is that hearings make the selection of a Supreme Court nominee more democratic and therefore the hearings become more “substantively valuable.”

The second benefit of the hearings is that they can validate previously contested constitutional choices. According to Dean Ringhand, the Senate hearing “is a form, a method in which we can have the type of democratic validation of what used to be controversial decisions.” As nominees unhesitatingly answer questions about previously controversial decisions, such as Brown v. Board of Education, they in effect, validate and demonstrate the constitutional understanding of the present time.

Dean Ringhand concluded her remarks by quoting legal scholar Jeremy Walter, who said that “The U.S. Constitution is an invitation to argue.” To that she added, “I hope that the history I’ve outlined… inspires you at least a bit to think about the confirmation process as a really good place to have that argument.”