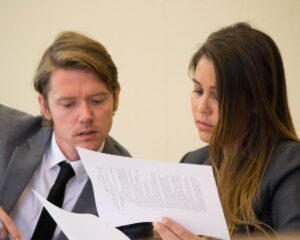 After finishing as semifinalists at the National Trial Competition, BYU Law School received an invitation to compete at the Top Gun National Mock Trial Competition. The best advocates from some of the top 16 trial advocacy schools go head-to-head for the honor of Top Gun in this elite, invitation-only mock trial tournament.

BYU Law student Grace Pusavat competed as first chair and was assisted by Joshua Wilkinson in Waco, Texas on June 3-7, 2015. Unlike other mock trial competitions, Top Gun competitors do not receive the case file until they arrive in Waco, 24 hours before the first round of trials begin. Preparation includes reviewing depositions, records, and photographs, and taking a trip to the actual places where events in the case supposedly occurred. Shortly before each round, competitors are assigned witnesses who may be used at their discretion. The jurors for each round are distinguished trial lawyers and judges.

Pusavat and Wilkinson have been involved in Trial Advocacy throughout their time at BYU Law. Wilkinson and his partner were the 2014 Linda Anderson Competition Champions. Pusavat and her partner finished as semifinalists at the 2015 National Trial Competition. The past two years they have competed under the guidance and mentorship of their coach, Peter Leavitt. Pusavat and Wilksinson agreed that Top Gun was the most organized and well-run competition they have ever attended with some of the toughest competition.

“It was both exciting and challenging to organize and present a case in such a limited amount of time. It tested my knowledge of evidence and all of my trial skills. It was truly a valuable learning experience and I feel honored to have had the opportunity to compete at Top Gun,” Pusavat said.